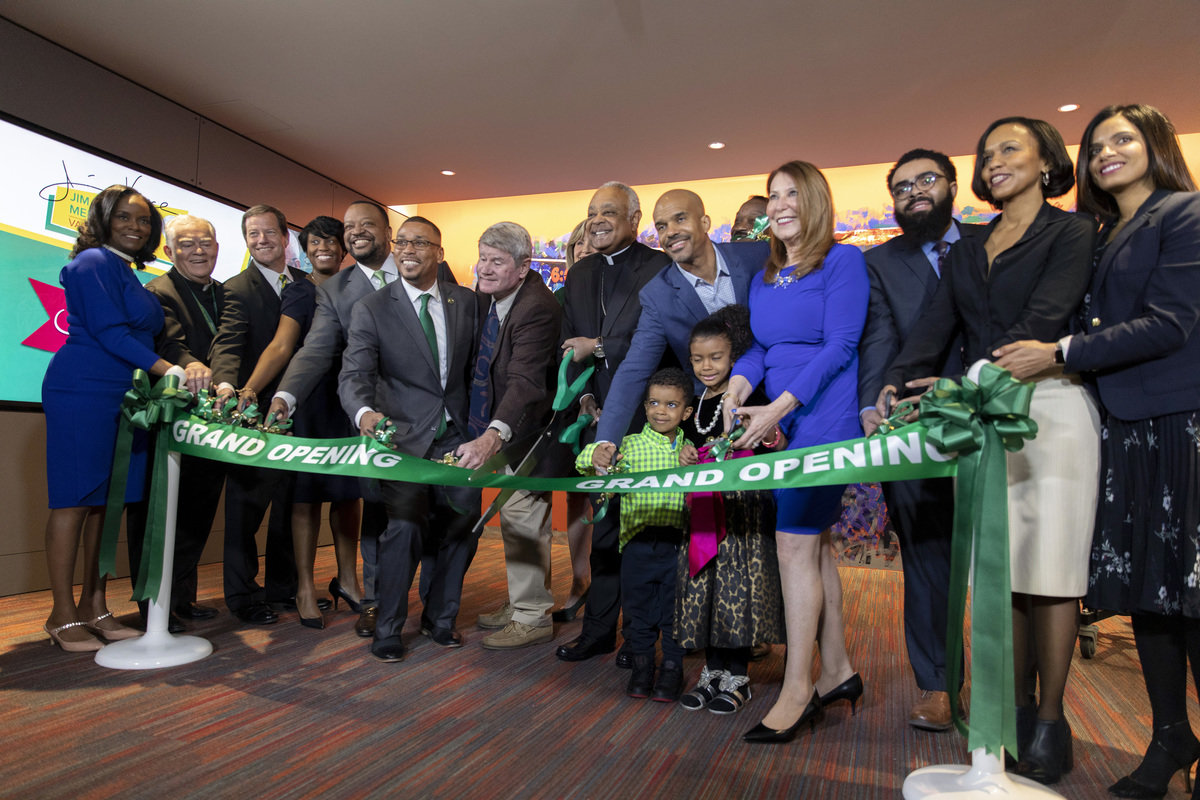 Archbishop Wilton Gregory blessed and cut the ribbon on March 12 at the new Jim Vance Media Center at Archbishop Carroll High School in Washington, DC, which houses an advanced program for journalism and media students.

“Here, may they (the students) discover the Lord Jesus who is the Truth and may they share this Truth through the technological advances available to them in this school,” Archbishop Gregory prayed as he blessed the new center. .

He added that the installation “is intended to help (students) discover and hone the skill of spreading the truth.”

The Jim Vance Media Center and program are named after Jim Vance, a veteran NBC4 Washington presenter who died in 2017 at the age of 75 after a brief battle with cancer. For many years before his death, Vance sponsored an annual scholarship to Archbishop Carroll High School and offered his support to Holy Comforter-St. The Cyprian Parish Community Action Group program provides outreach services to families affected by drug and alcohol abuse. In 2012, Vance received the Archbishop Carroll High School Hall of Honor award.

At the opening of the media center, Vance’s widow Kathy Vance announced that the family would continue the scholarships because “her heart was in this school and still is.”

The Jim Vance Media Center and the program are made possible by a $ 5 million donation from Steven Newby, a retired stockbroker and longtime benefactor of the school. It is the biggest gift in the history of the school. Newby is neither a Catholic nor a former Carroll student.

â€œAs a stockbroker, investing is what I do,â€ he said at the dedication. â€œSo I don’t see myself as a benefactor, I see myself as an investor who invests in the future. It is about preparing these scholars for the future and honoring and recognizing the good man that was Jim Vance. “

Archbishop Carroll High School is a Catholic, preparatory and coeducational school, founded in 1951 in the nation’s capital and sponsored by the Archdiocese of Washington.

Roger Fairfax, Chairman of the Board of Trustees of Archbishop Carroll High School, called Newby’s gift “an investment in the future of high-quality journalism.”

A four-year degree program for students, the Jim Vance Media Program is designed for students to learn journalistic principles, practices, and techniques.

â€œIt’s important to know that our future is secure and that we have students learning the trade that will help them tell our story tomorrow,â€ said Larry Savoy, president of Archbishop Carroll High School.

The highly competitive program – only 20 incoming freshmen are accepted each year – officially started in December 2018.

Dr Cherie Ward wrote the curriculum for the media program and designed the layout of the media center. She called the program “an elite, top-notch and comprehensive program that welcomes only the best of the best.”

During the four-year program, Vance Fellows will study sports journalism, public speaking, mass communication, fundamentals of print and broadcast journalism, digital media, photo journalism, and other courses. They will also participate in internships.

â€œThis program and this facility is meant to train young minds for tomorrow,â€ said Ijeoma Okere, one of the program’s students. “I learned what goes on in the art of journalism, and I understand it better.”

â€œI appreciate that people have invested in our future, and I like that we have to meet certain academic standards,â€ Okere said.

Fellow Vance Ryan Lynch said, “Thank God for the opportunity to go to such a great school with such a program.”

Prior to making his mark in Washington, DC as a news anchor, Jim Vance taught English at a public school in Philadelphia, the metro area where he grew up.

Imani Vance, one of Vance’s daughters, called the media program and the media center “the perfect fusion of her (Vance’s) career.”

Kathy Vance said she was grateful that the program honors her late husband and urged students to “use wisdom, words and wonder to advance the truth.”

â€œIt is a wonderful legacy and a tribute to my husband, our children and the family,â€ said Vance. “We are grateful and honored that Vance’s passion for journalism and education will continue through the Vance Scholars.”

Among those in attendance at the grand opening were several of Vance’s media friends. Donnie Simpson, host of The Donnie Simpson Show on WMMJ-FM (Majic 102.3 FM) and longtime friend and colleague of Vance, said he was impressed with the show and â€œseeing these wonderful students here today gives me a such hope for the future. “

Doreen Gentzler, an NBC4 presenter who co-hosted Vance for over 25 years, said “nothing would have made him happier” than seeing the school’s media center because “everyone world knew how deep his commitment to Archbishop Carroll was. “

Gentzler said Vance “enjoys raising young people … to help them become better, stronger and smarter at what they do.”

She challenged the Vance Scholars “to carry on the values â€‹â€‹that were so important to Jim Vance”.

Government of Kano. sets up a committee to “clean up the audiovisual media”