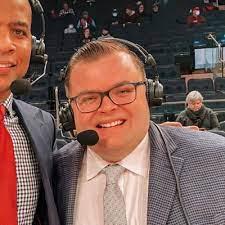 Fanta spends each winter crossing the East Coast (and select Midwest stops) as a Fox Sports broadcaster for the Big East games. He also hosts Big East Shootaround, which streams live on Twitter and YouTube.

His effervescent enthusiasm and obvious love for college basketball made him a cult hero among Big East fans. And so, with the Big East tournament taking place this week at Madison Square Garden, who better to join this week’s UConn Report podcast?

Fanta notes how special this week will be, with fans back in the world’s most famous arena at 100% capacity.

“This is the 40th Big East tournament at Madison Square Garden,” he noted, “and it’s only fitting that the Connecticut Huskies be part of it… This has a chance to really be the tournament of most eventful conference of any in the country this week.”

Fanta talks about her background, growing up in West Lake, Ohio, quickly determining her future in athletics was in the broadcaster’s booth, not the field, and attending Seton Hall.

We tackle several other topics for the week ahead: Can Seton Hall upset UConn in the quarter-finals (assuming the Pirates pass Georgetown in their opener)? Is Providence as “lucky” as KenPom’s ratings suggest? Does Tyrese Martin feel scorned and motivated after not being named to the Big East second team or honorable mention? Who is the favorite to become champion this week?

And how good is the Big East this season, anyway?

Of course, we’ll find out those answers over the next week in what promises to be an absolutely electrifying Big East tournament. And make it even better? Jim Calhoun will be in Madison Square Garden for the entire tournament, joining Fanta, former PC star Kyron Cartwright and former Creighton/Kansas standout Nick Bahe with the Big East Shootaround team all week.

If you are unable to listen to the podcast above, you can also listen to it here.