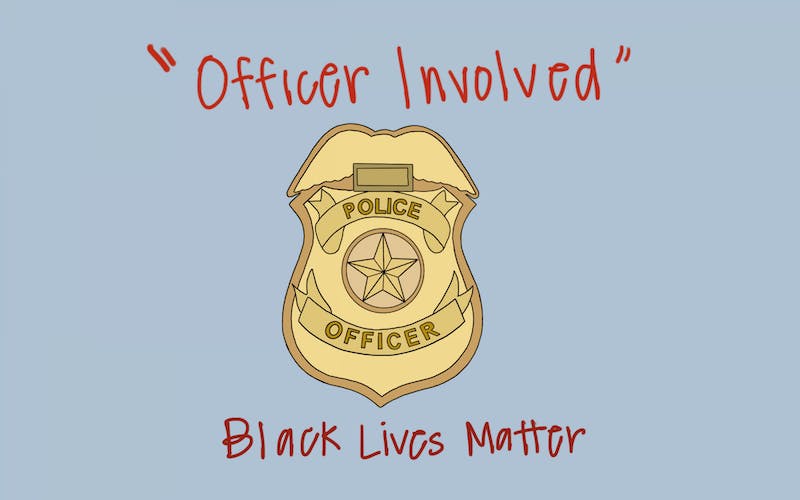 The AP Stylebook is the predominant guide that dictates the language journalists should use in stories.

AP Stylebook said the term “subject agent” is vague and reporters should be specific about what happened.

According to the Pew Research Center, more people in America, especially today, are susceptible to being influenced by the news media. In 2020, only 32% of Americans thought the media was influential. However, in 2021, nearly half of Americans said the media was growing in influence.

According to HuffPost, the media does not appear to be following this guideline by continually using vague, neutral language to describe police brutality.

For example, a FOX59 article said there was a “shooting involving a police officer.” However, the police officer was the only one who fired a shot during the incident.

Not naming police brutality not only denies the harm done to victims, but also protects the system which continually shows its disregard for black and brown lives.

Imagine being harassed by a policeman while you’re just going about your business. The officer continues the physical harassment leaving you seriously injured to the point of being hospitalized. A week after your harassment, you see an article calling your injury an “officer-involved” incident.

Journalists have the opportunity to expose this injustice and shed light on the ugly truth of policing, but instead they hide the truth. They erase the victim’s entire story by labeling the injury an “agent-involved” incident.

Can you imagine how much that would hurt someone?

Words like misunderstanding, disagreement, altercation and argument seem to be “neutral” but describe these events inaccurately.

The journalist’s intention may not be to erase what happened. They may just be trying to be “neutral”. But unfortunately, there are no neutral positions when it comes to police violence.

Police violence is not a matter of personal opinions or feelings. This is a human rights issue and reporters should approach it as such.

This “neutral” position allows the police to walk away with a minimum of responsibility. There have been many cases where police officers have not been charged, even when they have committed damage.

These cases of police violence are not isolated events. These are systemic issues that affect the entire policing system.

Instead of the public viewing these “officer-involved” incidents as an ongoing abuse of power, the language may suggest that they are just isolated events and not a systemic problem. The media must stop using vague and non-specific words to describe police violence. It does nothing to help in the fight against police brutality and the fight for human rights.