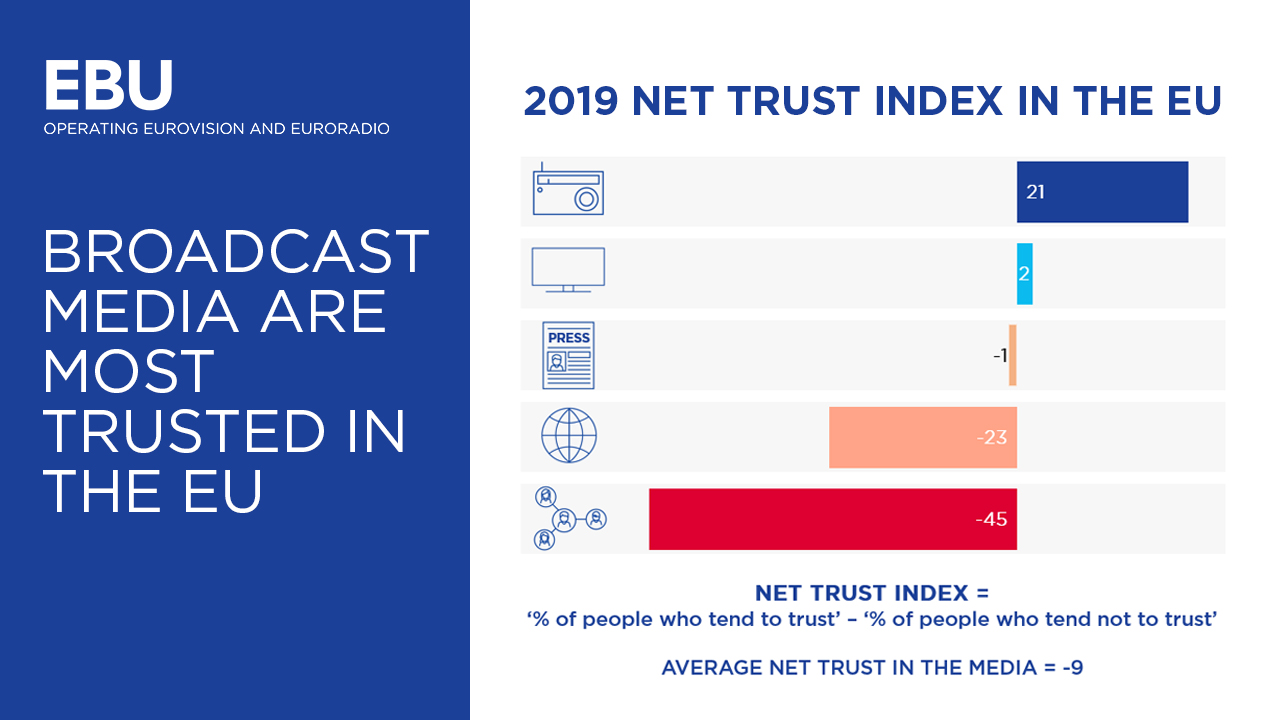 The new EBU report on trust in the media shows that radio and television remain the most reliable media across Europe. In contrast, social networks are the least reliable in 85% of countries.

This gap is highlighted when it comes to trusting information about COVID-19. While 47% of people use social media to learn about the virus, only 14% rank it among the most trusted sources. Globally, TV news channels are the most used source of COVID-19 news and the second most trusted source after government updates.

Trust in the Internet and social media has seen significant declines from almost stable levels of trust in traditional media. Over the past 5 years, Internet trust has declined in 91% of the countries surveyed, almost half of which significantly.

High confidence in information provided by national media means that citizens are less likely to perceive false information as a problem. Furthermore, the higher the level of trust in a country’s audiovisual media, the higher the freedom of the press tends to be in that country. The strong correlation suggests that citizens’ trust in radio and television is closely linked to a free and independent media landscape.

Dr David Fernandez Quijada, head of the EBU’s media intelligence service, said: “The results show that many people know who to trust – and not to trust – for crucial information, in particular. especially in times of crisis. As a public service media, we will not give up our work to provide valuable and independent information and services to citizens across Europe. It’s more important than ever. “

The Trust in Media 2020 report is available online (you must register on ebu.ch before downloading the full report)

This report is mainly based on data from the 92nd Eurobarometer. The 92nd wave of the survey was carried out in November 2019 in the 28 EU Member States as well as in the five candidate countries. In the section on trust in information, the Reuters Digital News Report 2019 is used as an additional source, while the section on trust and COVID-19 is based on survey data from GlobalWebIndex, Reuters Institute for the Study of Journalism, the UK regulator Ofcom and EBU member organizations.