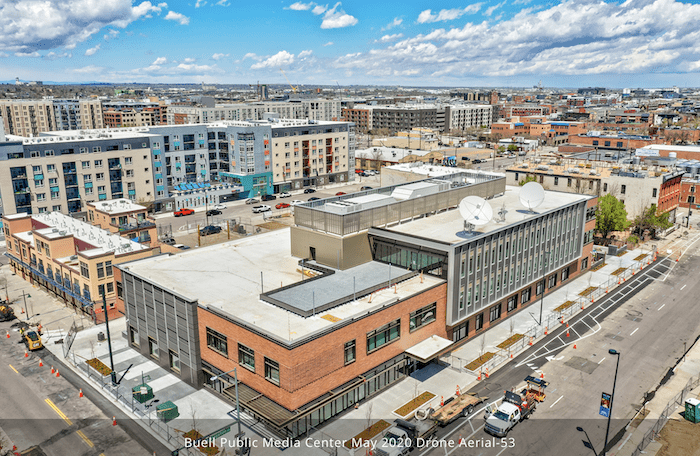 What was once a neglected warehouse with a needle-littered parking lot at the corner of 21st and Arapahoe streets in Denver is now the Buell Public Media Center, the one-of-a-kind new hub for Colorado leaders in public media and journalism. .

The three-story, $ 35 million building is an eye-catching and avant-garde anchor in the rapidly evolving Arapahoe Square neighborhood.

The first floor of the 65,000 square foot facility will feature a 125-seat Masterpiece theater and a live broadcast studio.

The second floor will house the offices of Rocky Mountain Public Media, KUVO and The Drop broadcast studios, KUVO offices, a lounge, a members-only listening library, editing and production suites and the necessary technology core. to distribute multimedia content to the world.

The third floor will house the COLab and a rooftop terrace for private events, meetings and enjoying the breathtaking views of the Denver skyline. Below grade is a 30,000 square foot parking structure with 84 parking spaces.

A vision for something bigger

Amanda Mountain, President and CEO of Rocky Mountain Public Media, had never designed a commercial real estate project in her life. But, to her, this new venture meant the opportunity for something much more impactful for Colorado.

â€œThe initial impulse was to build a new space that would allow us to bring together our Denver-based staff who were spread over two different sites,â€ says Mountain. â€œWhen I took over as CEO, I saw an additional opportunity to broaden this vision to include public media as the center of local storytelling and journalism. So we started talking to potential partners who would be interested in contributing to this vision and through those conversations we came to what I would describe as a national hub for public media.

The location, originally proposed by Denver Mayor Michael Hancock, was attractive to Rocky Mountain Public Media because of its location on the 5280 Loop, in the festival hallway and a few blocks from Coors Field. The site offered the public visibility desired by RMPM.

â€œThe goal was to increase the accessibility and transparency of what we do inside the building,â€ says Mountain. â€œGenerally speaking, media installations are concrete boxes and you don’t really know what’s going on inside. We didn’t want to take that edge. We love this neighborhood because it allows us to be more visible, where we will have more foot traffic and where we could be, literally, transparent at street level, bringing more windows into the space so that you can see the media being fabricated. “

2015 Mortenson and Tryba join the team

Once their location was secured, RFPs were issued for an architectural firm and, according to Mountain, Tryba Architects quickly rose to the top because of “their connection to the community and their background in creating places. dynamic engagement â€. Tryba helped determine and finalize Rocky Mountain Public Media’s programming needs, paying particular attention to its stringent budget requirements.

Wells Partnership has been appointed as the owner’s representative and the teams have entered into a design-build agreement with Mortenson Construction. With the supporting assets of Tryba, Rocky Mountain Public Media launched its fundraising campaign, the cornerstone of the project.

â€œThis is the largest fundraising project in Rocky Mountain public media history,â€ Mountain says. “In fact, this is only the second fundraising campaign in our 67 year history.”

As the Tryba-Mortenson-Rocky Mountain public media team collaborated on the design, the technical performance requirements of the space and the need for visibility were center stage. 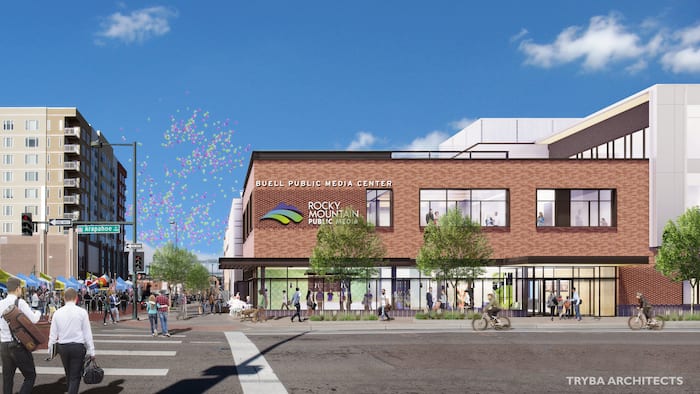 Located in Arapahoe and 21st Street, the neighborhood allows Rocky Mountain’s public media to be more visible, providing street-level transparency, bringing more windows into the space so passers-by can view the media in course of realization.

â€œA big concern for Tryba and Rocky Mountain Public Media was the scope of the integrator’s job, meaning everything that runs a TV and radio station,â€ says Dave Espinosa, project manager. at Mortenson. â€œThere are many requirements unique to these facilities, such as high quality walls for sound and acoustics, acoustic partitions for floors and all the requirements that come with the technology core itself where you have all the technology. which is distributed to all places around the building.

â€œWe created performance spaces with similar requirements in terms of acoustics and visibility, but not the same degree of broadcast and recording layering,â€ says John McIntyre of Tryba, ANZIA, International Assoc. AIA. â€œThere was also the vision for the building which was a response to (Rocky Mountain Public Media’s) values â€‹â€‹of being rooted and out of place while projecting a sense of the future. We wanted to celebrate their programs and make them visible, accessible and essential to the local community.

â€œWhat was really interesting was to create a building that feels very natural, comfortable and effortless and elegantly resolves the complicated interrelationship between technology, building systems and land use planning with this desire to community connection. “

As Mortenson’s teams wrap up the highlights list and interior details are tweaked, the Buell Public Media Center appears to have achieved the lofty vision of Mountain and his team.

Its overall scale, use of textured red brick, and expansive courtyard harmonize perfectly with the historic Hotel de Paris building next door. Metal panels on the exterior skin, paired with exposed raw iron beams on the interior, are clear nods to the neighborhood’s industrial past.

At the pedestrian level, walls of windows and large welcoming glass doors invite the public into the space and it looks more like a hotel entrance than a multimedia center. The massive windows bathe the interior space in light and beautifully break up the massing. Along the side of 21st Street where the Masterpiece Theater dominates, larger windows break up the mass, but they house 55-inch LED monitors that will broadcast live events, shows, and event programs.

Along the side facing Arapahoe, another expansive window invites pedestrians to stop and watch live concerts in the Performance Studio space. If visibility and transparency were the objectives, the team delivered a show-stopper.

The grand lobby features a pleasant interweaving of industrial and contemporary finishes with cedar ceilings and vertical two-story wood slat wall panels adding warmth, beautiful pendant lights, beige masonry walls, polished concrete floors and exposed raw iron beams. This is no exaggeration, but a level of elegance and sophistication that is not associated with a municipal building.

â€œWe believe the project has brought significant value to RMPM and represents a real cultural change,â€ says McIntyre. â€œIt’s a different way of working, which I think will be really exciting for them as an organization. “

â€œI’m really proud of the team that came together to make this vision a reality,â€ says Mountain. â€œIt has been a mad rush to get here in a relatively short period of time. Our team has just been so focused, so committed and that it is even a reality for us to move in and stay on budget is just a miracle. It is a miracle created by these extraordinary people whose commitment goes far beyond professional boundaries.

And while the building itself is a success, what that means for the future of journalism in Colorado could be immense.

“It is necessary,” says Susan Greene, editor of the Colorado Independent and former columnist for the Denver Post. â€œA lot of us have spent a lot of our careers in newsrooms, so that will bring us back to this creative environment where we are close to each other. News and collaboration are born from this proximity. So a coworking space, on top of that kind of pre-existing collaborative spirit, is a way to really change the way we do business.

Published in the June 2020 issue of Building Dialogue.