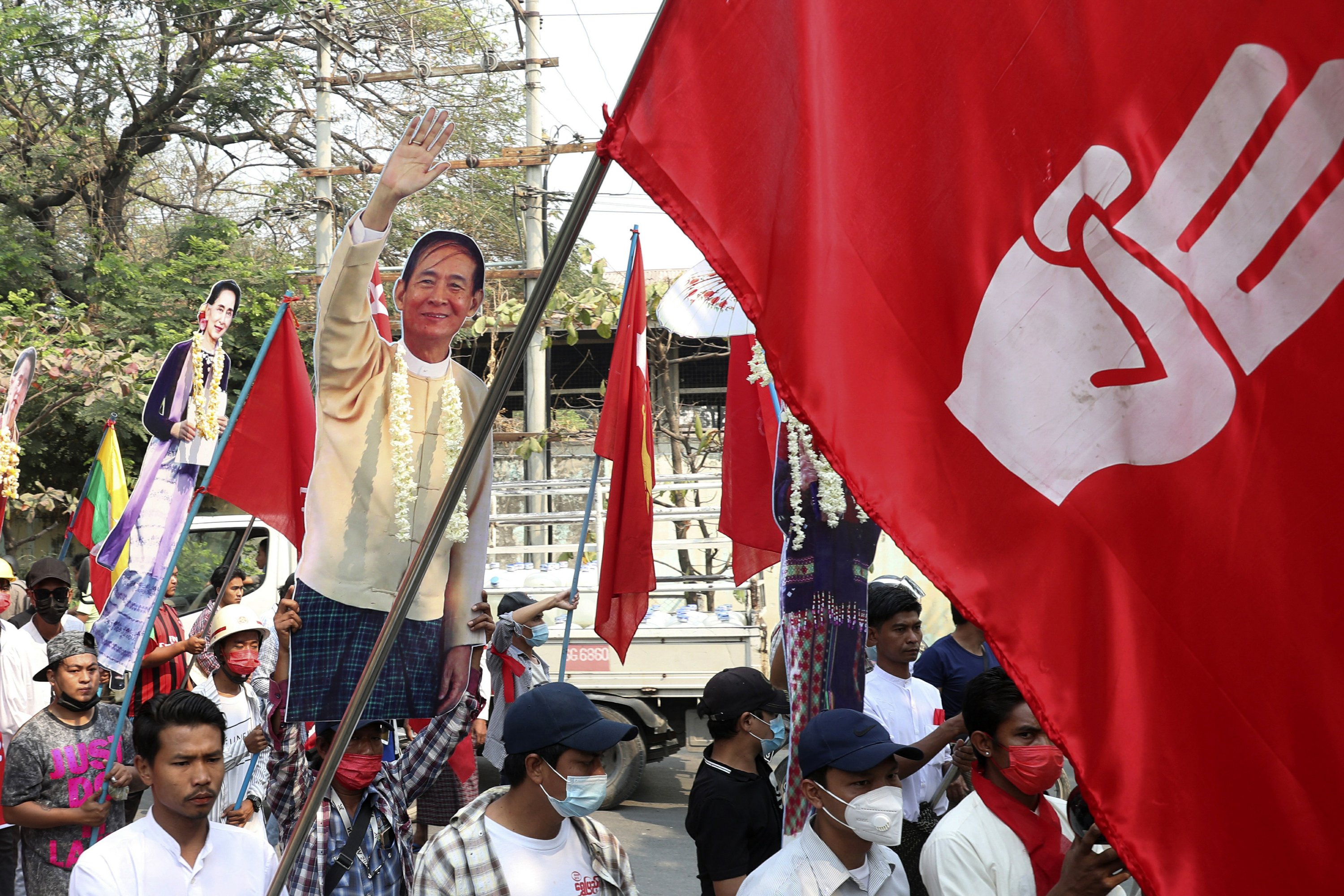 YANGON, Myanmar (AP) – Protesters in Myanmar’s largest city came out on Monday evening for their first mass protests in defiance of the 8 p.m. curfew, seeking to show their support for around 200 students trapped by the forces of security in a small area of â€‹â€‹a neighborhood.

Students and other civilians had previously participated in one of many daily protests across the country against the military seizure of power last month that toppled the elected government of Aung San Suu Kyi.

The military government has also put a major brake on media coverage of the crisis. He announced that the licenses of five local media outlets – Mizzima, DVB, Khit Thit Media, Myanmar Now and 7Day News – had been canceled.

“These media companies are no longer allowed to broadcast, write or give information using any kind of media platform or using media technology,” he said on public broadcaster MRTV.

All five had offered extensive coverage of the protests, often with live video online. Myanmar Now offices were raided by authorities on Monday before the measure was announced.

DVB said it was not surprised by the cancellation and would continue to broadcast on satellite TV and online.

“We are concerned for the safety of our journalists and staff, but in the current uprising the whole country has become citizen journalists and there is no way for the military authorities to block the flow of information.” , said executive director Aye Chan Naing. Associated Press.

The government arrested dozens of journalists since the coup, including a journalist from Myanmar Now and Thein Zaw from AP, both of whom were charged under a public order law punishable by up to three years in prison.

Overnight street protests began after police cordoned off part of Yangon’s Sanchaung neighborhood and reportedly conducted door-to-door searches for those who fled attacks by security forces to seek refuge in homes in the city. friendly strangers.

Word of their plight quickly spread through social media and people flocked to the streets of neighborhoods across the city to show solidarity and in hopes of easing some of the pressure on the hunted protesters. . In some streets, they built makeshift barricades with whatever was close at hand.

In the Insein neighborhood, they spread through crossroads, singing songs, chanting pro-democracy slogans and banging objects together.

The diplomatic missions of the United States, Britain, Canada and the European Union have all issued statements urging the security forces to allow those trapped to return to their homes safely. While everyone sharply criticized the February 1 coup and police brutality, it is unusual for such diplomatic statements to be released in connection with a specific ongoing incident.

â€œThere is increased tension caused by security forces around Kyun Taw Road in Sanchaung County, Yangon. We call on these security forces to withdraw and allow people to return home safely, â€the US Embassy statement said.

Reports on social media citing witnesses said that up to 50 people were arrested overnight in Sanchaung and other parts of the city, but many of those in hiding were able to leave safely to the city. dawn Tuesday, hours after police abandoned their search.

UN Secretary-General Antonio Guterres was following developments in Sanchaung district where “many of those trapped are women, marching peacefully in commemoration of International Women’s Day,” said the spokesperson for UN, StÃ©phane Dujarric.

“He calls for maximum restraint and calls for the release of all in safety, without violence or arrest,” said Dujarric, and for respect for the rights to freedom of assembly and expression for peaceful protesters expressing “their hopes and desires for the future of their country. . ”

Guterres also called the occupation of a number of public hospitals in Myanmar by security forces “completely unacceptable,” the UN spokesperson said.

Online newspaper Irrawaddy said the victims were shot in the head during protests against the coup in Myitkyina, Kachin state. Graphic video on social media showed protesters backing up from tear gas, responding with stones and then fleeing after a shootout in what appeared to be automatic gunfire.

The demonstrators hastily took away the wounded, including one apparent death, a person seriously injured in the head. A second body was later seen on a stretcher with its head covered with cloth.

Another gunshot death occurred in Pyapon, a town about 120 kilometers (75 miles) south of Yangon.

To date, the government’s violent crackdown has left more than 50 protesters dead. At least 18 people were shot dead on February 28 and 38 on Wednesday, according to the United Nations Human Rights Office.

Security forces also cracked down on anti-coup protesters elsewhere on Monday, firing tear gas to disperse a crowd of around 1,000 demonstrating in Pyinmana, a satellite town of the capital, Naypyitaw. Protesters deployed fire extinguishers to create a smokescreen as they fled from authorities.

Thousands of protesters who marched in Mandalay, the second largest city, dispersed on their own, fearing that soldiers and police would consider breaking up their protest by force.

Meanwhile, an armed force from one of Myanmar’s ethnic groups has been deployed to protect anti-coup protesters following a brutal junta crackdown.

The Karen National Police Unit arrived shortly after dawn to accompany around 2,000 demonstrators near Myitta, in the Tanintharyi region of south-eastern Myanmar. They carried an assortment of firearms, including assault rifles, as they marched past the column on dusty rural roads.

The Karen Police are under the control of the National Karen Union, one of the many ethnic organizations that have struggled for decades for greater autonomy from the central government. The KNU employs both political means and, through its armed wing, military means to achieve its objectives.

Large-scale protests have taken place in many towns and villages on a daily basis since the Myanmar military took power, and the security forces have responded with increasing use of lethal force and mass arrests.

Police on Sunday occupied hospitals and universities and reportedly arrested hundreds of people involved in protests against the military takeover.