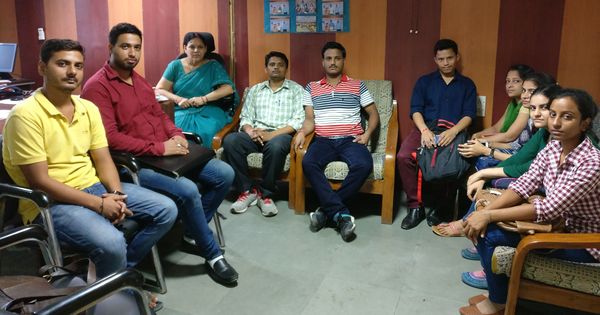 Among the first group of Sanskrit journalism students at Shri Lal Bahadur Shastri Rashtriya Sanskrit Vidyapeetha in Delhi, there is little interest in mudrankan madhyam, or print media. Their curriculum trained them for print and electronic media, but most students say they would prefer vaidyut madhyam, or electronic media.

â€œFor the print, I think you need a better command of the language,â€ said Shweta Arya, one of the 25 students in the class. A Sanskrit master’s student at Vidyapeetha, a reputable university in Delhi, she is still better off than several of her classmates who last studied Sanskrit at school. Deveshi Kapoor, for example, graduated in sociology from Ambedkar University in Delhi. Rashi Sharma is a second year undergraduate student at the School of Open Learning at the University of Delhi, which offers the distance course. Punita Singh holds an English degree (Honors) from Jai Prakash University in Chhapra.

Launched in 2016, Vidyapeetha’s one-year diploma also includes English and Hindi journalism courses. It is curiously called “bhasha patrakarita”, language journalism. Kapoor and Sharma hope this will help them find jobs in Hindi or English publications or TV channels. â€œSanskrit was part of our course, not everything,â€ Kapoor explained. â€œBut we were also taught to translate. One of them, Deepak Mishra, has already landed a job at STV Haryana, a Hindi channel. Currently, 12 students from the first class are interning at All India public radio. Only some of them decided to pursue a career in journalism.

The Vidyapeetha is working with the Indian Institute of Mass Communication in Delhi to organize a more advanced three-month certificate course in Sanskrit journalism, the institute’s director general announced last week. The institute, which has no staff to teach Sanskrit, will send professors of Hindi journalism to teach technical aspects of mass communication. While classes will be held in the evening at Vidyapeetha, students will also have access to the institute’s library, studio and community radio. The Vidyapeetha will teach the language.

The program is the initiative of Kamla Bhardwaj of the vyakaran (grammar) department of Vidyapeetha. Although Bhardwaj included articles on reporting and editing, and brought in professional journalists and staff from the Indian Institute of Mass Communication to take courses, so far Sanskrit journalism has been a translation exercise. â€œPeople listen to Sanskrit radio and television programs for the language, not for the news,â€ said Baldevanand Sagar, a Sanskrit scholar who has spent more than four decades with the Sanskrit unit of All India Radio.

Sagar read the first Sanskrit newsletter on Doordarshan, the public broadcaster, on August 21, 1994. Twenty years earlier, he had been the third Sanskrit newsreader on All India Radio. Although no figures are available, Sagar was able to gauge the popularity of the programs from the comments received by the stations once the text and audio of the bulletins became available online around 2006. Sagar recalled having received mail from the public even in Nepal, Pakistan and Sri Lanka.

He is now working with Bhardwaj to compile a lexicon of terms to help students. One of the eight articles in the diploma program is devoted to language alone, specifically learning Sanskrit equivalents of words and phrases such as BJP (bhajpeti dalasya), cricket races (dhavanank), missile (prakshyapatra ) and stock market index (telakank). However, the students took several minutes and the help of their teacher to find “caryan durghatan” for car accident and “marg sangharsh” or “marg vivaad” for road rage.

â€œThere are enough Sanskrit words to allow for translation, but sometimes thinking of an equivalent term quickly can be very difficult,â€ Bhardwaj said. â€œScientific terminology is the most difficult. ”

What students want to learn

Students have varying expectations of the course. Surender Kumar, a doctoral student at Vidyapeetha which is part of the first batch of journalism, pointed out that Sanskrit scholars can contribute content on Vaastu Shastra, the Hindu architectural system, and establish horoscopes, or Rashifal, based on their training. in jyotish. . He sees new websites and journals as another channel through which students can disseminate their research.

Many of them were already Vidyapeetha students – they got a fee reduction – and might not go into journalism at all. Sudhir Nautiyal, a doctoral student who is part of the program, wants to “focus on teaching for now”. Sandeep Senwal, who is also pursuing Vidyapeetha’s Bachelor of Education program, is unsure which of the two professions he will ultimately choose.

Shweta Arya joined, convinced that the degree would “develop her personality and help build her self-confidence.” Amritesh Kumar, a graduate in computer applications, already has a job with a digital marketing company; joined because he has “a lot of family members in the Sanskrit realm”. He may not be a full-time journalist, but is interested in “Sanskrit content online”.

Although Doordarshan is expanding its Sanskrit programming – it has launched Vartavali, a weekly discussion described as a â€œSanskrit news magazineâ€ last year – employment opportunities for Sanskrit-speaking journalists are few in public institutions, or even in broadcast media in general. After Sagar’s retirement from All India Radio in 2012, no permanent Sanskrit news staff was left in either of the two public broadcasters. â€œNow all of them are casuals, hired as needed,â€ he said. Bhardwaj was such a reader for All India Radio and Doordarshan until 2016 – she started the first in 1997 and the second in 2005 – and was responsible for sending many of her students to them, again as “employees. occasional â€.

But those who wish to pursue Sanskrit journalism believe they can turn to a number of newspapers and websites launched by private owners and organizations over the past decade. Without counting Kashi Vidya Sudha Niti (colloquially known as Pandit Patra), began in the 1800s, and Mysore Sudharma (started in the 1970s), there are dozens of Sanskrit publications. There are also other Sanskrit journalism courses. The University of Uttarakhand Sanskrit, for example, offers degree programs.

Sagar mentioned several other dailies such as the Sanskrit Vartaman Patram and Vishvasya Vrutantam – in print and online – and the Lucknow-based company Suprabhatam. There is even a 24 hour Sanskrit radio station, Divyavani, started in Pondicherry three years ago, which hosts a series of programs, including information.

Sagar said that the Bharatiya Sanskrit Patrakar Sangh was registered in 2011. At present, it has 80 members.

In addition to these, there are several Sanskrit news websites, including Jahnavi, Prachiprajna and Samprativartah. The last of them is building its own lexicon and has made at least part of it public in the “new words” section of its website. In this lexicon, laptop is anksangankam, smritishalaka usb stick, kushaldoorvani smartphone and krishnadhanam black money.