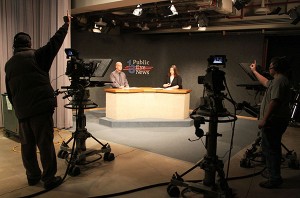 Employees and students involved with WNMU Public TV-13 and WNMU-FM Public Radio 90 are seeking to cut expenses by a combined $44,000, following federal sequestration budget cuts that took effect in March.

WNMU Public TV-13 is the public television station for the Upper Peninsula and northeastern Wisconsin. It offers programs like the High School Bowl, an academic contest, the Ask The… series in which people ask questions of doctors, lawyers, real estate agents, CPAs, and the Michigan DNR, and Public Eye News, a 15-hour news program. minutes led by an all student crew.

Eric Smith, general manager of WNMU TV, said that as a result of the sequestration, all federal agencies and corporations are taking a 5% cut, including public broadcasting. 5% for WNMU TV and Public Radio 90 equals approximately $44,000.

Smith said about 20 to 30 students work for the Public Eye News television news segment each semester. They try to manage it in a way that it doesn’t affect Public Eye News, because it’s directly related to the courses the students are taking.

“Students have the benefit of being able to train and work in an environment that is effectively a live, live learning lab,” Smith said. “Public broadcasting has the advantage of having students learning the craft and helping them produce programs that people back home ultimately watch and enjoy.”

Gavin Leach, the vice president of finance and administration, said at this stage he would not be able to provide any real depth on the direction and impact of the cuts.

According to Leach, university officials are in review mode and allowing specific areas to identify plans on how to deal with the cuts that affect their areas.

“The student organization Public Eye News should not be affected at all,” Thomson said. “It will continue at 4 p.m. every day for next year and hopefully for many years to come.”