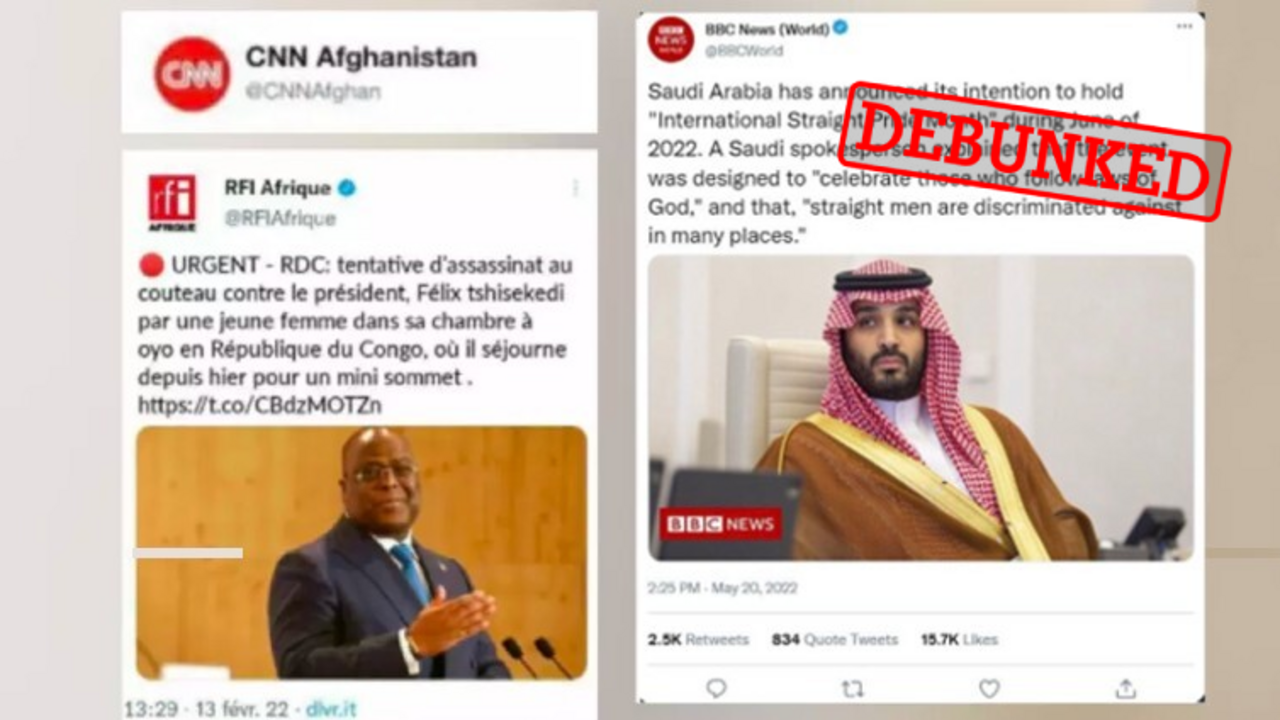 How to identify fake tweets claiming to be from the media

Fake tweets designed to look like they come from real media are on the rise on social media. But what are the little details that help you identify the content for what it is? The FRANCE 24 Observers team will walk you through some examples of how we demystify these tweets in the hope that you can spot them yourself in the future.

On Twitter, there are more and more fake tweets designed to give the impression that they come from established media. The BBC and US broadcaster CNN have been frequent targets, especially since the start of the war in Ukraine.

However, there are techniques to identify them.

It’s all in the name…

When you see a suspicious tweet, the first thing you should do is check to see if the author is who they say they are.

Take a look at the account of the Twitter user who posted the tweet. Media have what’s called a Twitter verification, which is a little blue circle with a check mark next to their name. The blue sticker (which can also sometimes appear white depending on whether you’re using dark or normal mode on Twitter) means that Twitter has verified the authenticity of the account and the user behind it.

These accounts copied the news channel‘s logo and created usernames that made it look like they were affiliated with CNN. Accounts @CNNUKR and @CNNAfghan claimed to be the outlet’s Ukrainian and Afghan offices, respectively. Both accounts spread a false rumor about the death of an American in Ukraine.

Both of these accounts do not have the verified thumbnail, unlike the official CNN accounts, like @CNN Where @cnnphilippines. CNN also reported these two accounts to Twitter, which suspended them (read the article on this subject from our colleagues at AFP by clicking here).

It’s important to make a habit of checking Twitter accounts to see if they have certification if they claim to be media. But beware: some fake accounts add a “✔️” or “✅” emoji to give the impression that they have been verified. So make sure the check mark is in a blue or white badge next to the username.

If an account does not have this certification, you should be wary. This doesn’t always mean that the account is fake: it can also be a medium with a small audience or a newer medium that has not yet completed the verification process.

Most fake tweets shared online come in the form of doctored screenshots.

There are several methods to create these fake tweets, which sometimes look very real. Unfortunately, the process is quite simple.

Some tweets are edited using an editing program like Photoshop. If you take a closer look at the font and the number of characters used, you can sometimes spot these fakes, especially because they often deviate from Twitter’s standards.

For example, this screenshot of a tweet falsely attributed to the BBC claims French President Emmanuel Macron made a statement saying there were 60 million refugees in Europe.

Macron:
“Europe will have to accept up to 60 million refugees over the next 20 years from Africa and the Middle East, as sanctions against Russia will lead to an economic collapse in Africa which imports a huge amount of Russian wheat .” pic.twitter.com/D3TH7TIOAE

If you look closely at this tweet, you can see that the text is surrounded by a color that is not the same as the background. Additionally, the number of characters used exceeds Twitter’s 280 character limit.

Scrolling through the BBC’s Twitter feed, we found a tweet that looks like and was posted around the same time as the fake tweet. This one, however, is not about refugees at all. Check it out below.

The BBC also denied publishing this tweet (we debunked this tweet on our French site in April).

Another example is this tweet falsely attributed to CNN. This is an alleged secret Chinese document predicting the downfall of the West due to multiculturalism.

The tweet does indeed have the check mark verifying the account. However, the text has a slightly gray outline and the number of characters used, 302, exceeds Twitter’s 280 limit.

Apart from Photoshop, there are also other methods to create a fake tweet.

However, it gives people hoping to share misinformation a window of opportunity. They change the source code, the modified tweet appears on their screen. They can then take a screenshot of it and share it on social media. The tweet seems, for all intents and purposes, real.

Moreover, there are actually sites online where you can generate fake tweets. All you need to do is enter a username, upload a profile photo, and choose a time. You can even add a verification badge if you want. You can’t share them directly to Twitter but, again, you can post a screenshot of the image.

There are a few clues that can help you identify these fake tweets. First, you can check whether the suspicious tweet in question was posted on a media outlet’s Twitter account or not.

Take the example of a tweet attributed to the BBC that circulated online in late May.

You can see the verification badge in this screenshot. The username matches an official BBC Twitter page, “@BBCWorld”. To check if the outlet actually posted this tweet, we can run the keywords that appear in the tweet through an advanced Twitter search.

It turns out that no tweets using these two words appear in this search. You can use the same method to see all tweets shared by this BBC account containing the words “Saudi Arabia”. Again, no post in this account mentions a “straight pride month” in the kingdom.

You can also scroll through the BBC Twitter account and check what was posted at the time and when the tweet you want to check was supposedly shared.

What if the BBC had shared this tweet, only to delete it later? You can also understand this because a deleted tweet doesn’t just disappear, it leaves a trace.

This is the case, in any case, of this tweet falsely attributed to the BBC about the Saudi Crown Prince Mohammed bin Salman. The tweet says there have been “834 quote tweets”. If you do an advanced search for May 22 on the “@BBCWorld” account, then you should find an indication that the original tweet was deleted in the tweets that mentioned it. But there isn’t.

It is also possible to verify the tweet using the “WayBackMachine”, an archiving tool that saves previous versions of sites. You can see what appeared on that Twitter page on the date and time the tweet you’re checking was shared, as long as the page has been archived.

Here is a list of habits you should adopt to help you verify tweets allegedly broadcast by the media.

If you want to dive deeper into more techniques to verify content online and avoid fake news, check out our guide.