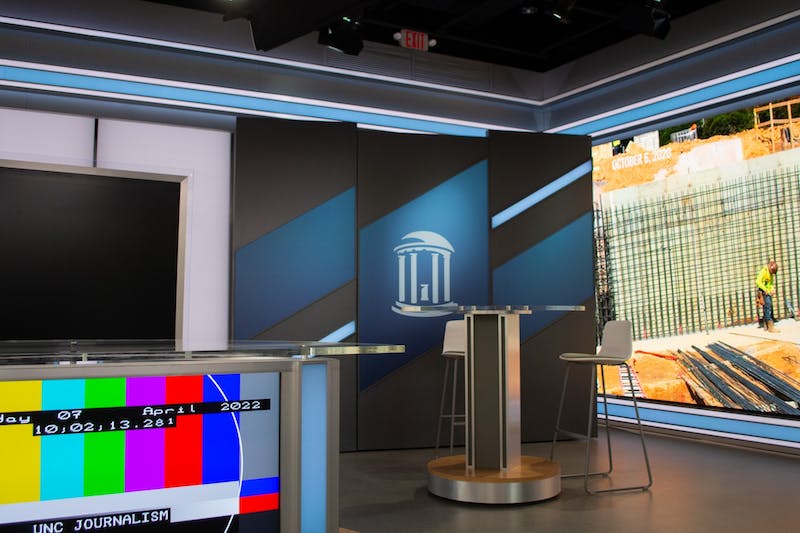 On Thursday morning, Charlie Tuggle, senior associate dean for undergraduate studies at the Hussman School of Journalism and Media, walked past floor-to-ceiling windows and a giant broadcast screen.

Tuggle stood inside the Curtis Media Center – the newest expansion of the journalism school, which had planned to be open for a full course schedule during the fall semester.

Construction of the building was announced in late 2018 when the Curtis Foundation committed $10 million for the journalism school, eight million of which would be used for the new center.

And on Thursday, more than a year after its scheduled opening in January 2021, the Curtis Media Center had its official grand opening.

Tuggle said the center is complete with a broadcast studio, control room, seminar meeting spaces, multiple classrooms and a MakerSpace.

“It opens up a lot of possibilities for the whole school of media and journalism,” he said.

Tuggle added that the building will effectively serve as a central broadcast hub.

Visiting students and faculty can watch sports games, coaching conferences, or live broadcasts of performances in Memorial Hall via the broadcast screen visible outside the building. This feature is useful, he said, because of the center’s location between Franklin Street and Central Campus, and its access to other academic spaces.

“We relate to everyone,” Tuggle said. “We are connected to the arts. We are related to athletics. We now have camera locations on campus.”

The center is also equipped with a unique audio system, called virtual microphone technology, which transmits sound so teachers don’t have to be on the mic while teaching. Its roof is fitted with solar panels, which Tuggle says will produce enough electricity to offset the building’s use.

“Everything we envisioned is part of what we have, and now we are thinking about the future,” he said. “We can’t stand still when it comes to technology because it changes every two months. So we built a building that would fit.

An example of this adaptability are the center’s classrooms. The large classrooms on the second and third floors have dividing walls in the center, which can be removed to accommodate 50 students or used to divide the room in two for smaller classes.

Gary Kayye, professor of advertising and public relations at the School of Journalism, said the classrooms at the Curtis Media Center are true HyFlex classrooms.

Professors can use instructor reference monitors to see students on Zoom as if they were an extension of the classroom, he said.

“So what’s cool about it is that if the students miss class, they’ll feel more included in the class because they’re having a two-way experience, and the teacher can actually see them.”

“It’s amazing,” Sari said. “We have state-of-the-art technology, great anchor seats. I mean, there are no complaints.

A political science and journalism major with a concentration in broadcasting, Sari works on the Carolina Week broadcast program.

She said the hub will make it easier for broadcasters to cover different events, such as basketball games and Memorial Hall performances.

“We have everything here,” Sari said. “And I think that’s going to save us a lot of time, a lot of energy, and it’s just going to elevate our show to a level that it just hasn’t reached.”

On Thursday, Sari was able to explore the centre’s new broadcast studio and other features she will be able to use next year.

“I never thought we would have this amazing space,” Sari said. “Not at all.”

To get the day’s news and headlines delivered to your inbox every morning, sign up for our email newsletters.