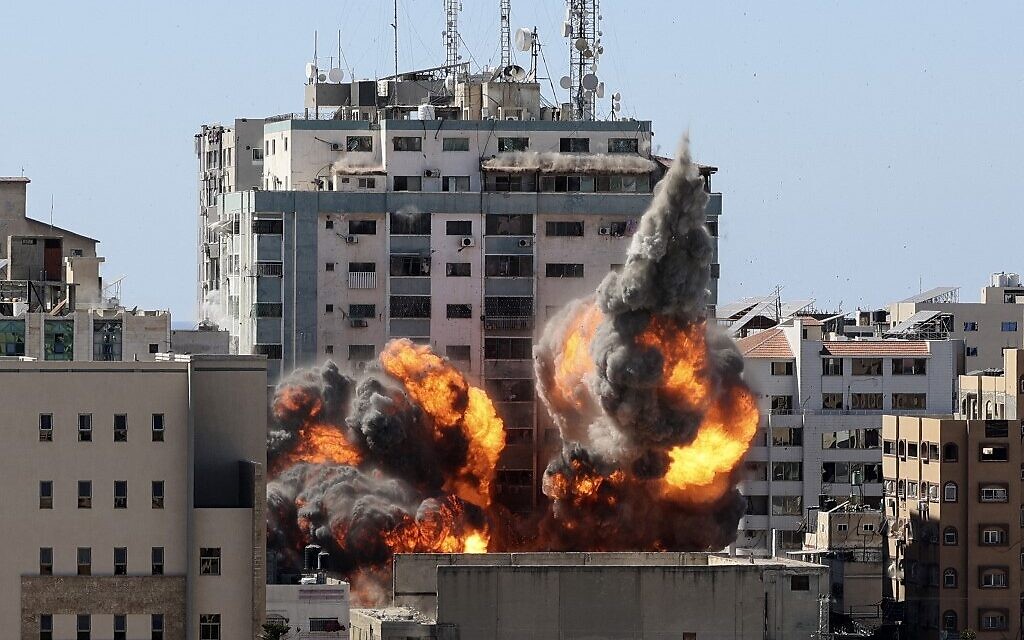 After warning the occupiers to leave, an Israeli airstrike razed a tower block in Gaza City that housed the offices of the Associated Press, Al Jazeera and other media on Saturday afternoon.

The Al Jala building hid “military assets” used by the intelligence wing of the Hamas leadership in the Gaza Strip, the Israel Defense Forces said in a statement after the strike.

The IDF accused Hamas of “hiding behind” the offices of news organizations in the tower and “using them as human shields.”

“The Hamas terrorist group intentionally locates its military resources in the heart of the civilian populations of the Gaza Strip,” the IDF said.

By registering, you accept the conditions

AP, which confirmed that it had been warned by the IDF that the building would be destroyed, said it was “shocked and horrified” by the destruction of the building.

White House press secretary Jen Psaki said the United States had “communicated directly to the Israelis that ensuring the safety and security of journalists and independent media is a primary responsibility.”

The video shows AP, AJ and other journalists assembling their equipment and gear to evacuate their offices in the 12-story al-Jala residential building in the heart of Gaza before bombarding and destroying it on the ground with missiles fired from its warplanes today. #Gaza # ØºØ²Ø©_Ø§Ù„Ø¢Ù† pic.twitter.com/jCtctH0O4R

The military also noted that it warned those in the building before the strike and gave them enough time to evacuate.

â€œBefore the strike, the IDF warned civilians in the building and gave them enough time to evacuate the building,â€ the military said. The warnings included drone strikes on the roof that did not cause serious damage and calls to occupants.

Explosions rocked the area when the 12-story building was shot down.

#VIDEO Al Jazeera released footage showing the building collapsing to the ground after the Israeli airstrike, sending a huge cloud of dust and debris https://t.co/2czISM0AkC pic.twitter.com/X5CuNpl5I5

In response to the destruction of the tower, Abu Obeida, spokesman for Hamas’s military wing, threatened to target central Israel, saying “residents of Tel Aviv and the center must be on standby.”

Gary Pruitt, chairman and CEO of The Associated Press, issued a statement on Israel’s leveling of the building, saying the press service was “shocked and horrified” by the destruction of the building.

“[Israel has] had known the location of our office for a long time and knew that journalists were there. We received a warning that the building would be affected, â€the statement read.

Pruitt said they managed to evacuate all AP staff on time.

â€œIt’s an incredibly disturbing development,â€ said Pruitt. â€œWe narrowly avoided a terrible loss of life. A dozen journalists and PA freelancers were inside the building and luckily we were able to evacuate them in time. The world will know less about what is happening in Gaza because of what happened today.

Walid al-Omari, head of Al Jazeera’s Jerusalem bureau, said Israel has decided “not only to bring destruction and murder, but also to silence those who broadcast it.”

The strike came shortly after massive rocket fire was fired by terrorists into the Gaza Strip towards central Israel. In Ramat Gan, a 50-year-old man was killed when a rocket hit near his home.

Terrorist groups in Gaza said the rocket barrages in central Israel came in response to an apparent IDF overnight strike on a three-story building in the Shati refugee camp in the Palestinian enclave. Palestinians said 10 family members were killed in the strike, most of them children.

The IDF said details of the strike were being reviewed, but the prime minister’s Arabic-language spokesperson tweeted that Hamas was to blame for the deaths.

â€œHamas deliberately targets civilians. It has so far fired more than 2,300 rockets at Israeli towns, aiming to kill thousands of Israelis. At the same time, he is hiding behind Palestinian civilians and using them as human shields, â€Ofir Gendelman tweeted. “It’s a double war crime.”

A thick column of smoke rises from the Jala Tower as it is destroyed in an Israeli airstrike after the IDF warns the occupiers to leave, Gaza City, May 15, 2021 (MAHMUD HAMS / AFP)

Israel has struck hundreds of buildings in the Gaza Strip, including several skyscrapers in response to rocket attacks since Monday. The military maintains that the targets it hit are all assets of Hamas or other terrorist groups.

Palestinian terrorists in Gaza have fired more than 2,300 rockets at Israel since the fighting began on Monday, according to the Israel Defense Forces.

Ten Israelis, including a young child, were killed in the rocket fire and hundreds were injured.

In Gaza, the death toll rose to 139 on Saturday, including dozens of children, with more than 1,000 injured, according to the Hamas-led health ministry.

Terrorist groups Hamas and Islamic Jihad have confirmed 20 dead in their ranks, although Israel claims the number is much higher and dozens of those killed were terrorists. In addition, the IDF claims that some of the deaths were caused by stray rockets fired at Israel that fell below their targets and landed in the Strip.

Are you serious. We appreciate this!

We are really glad you read X Times of Israel Articles in the past month.

That’s why we come to work every day – to provide discerning readers like you with must-see coverage of Israel and the Jewish world.

So now we have a request. Unlike other media, we have not set up a paywall. But since the journalism we do is expensive, we invite readers for whom The Times of Israel has become important to help support our work by joining The Times of Israel community.

For as little as $ 6 per month, you can help support our quality journalism while benefiting from The Times of Israel WITHOUT ADVERTISING, as well as access to exclusive content reserved for members of the Times of Israel community.