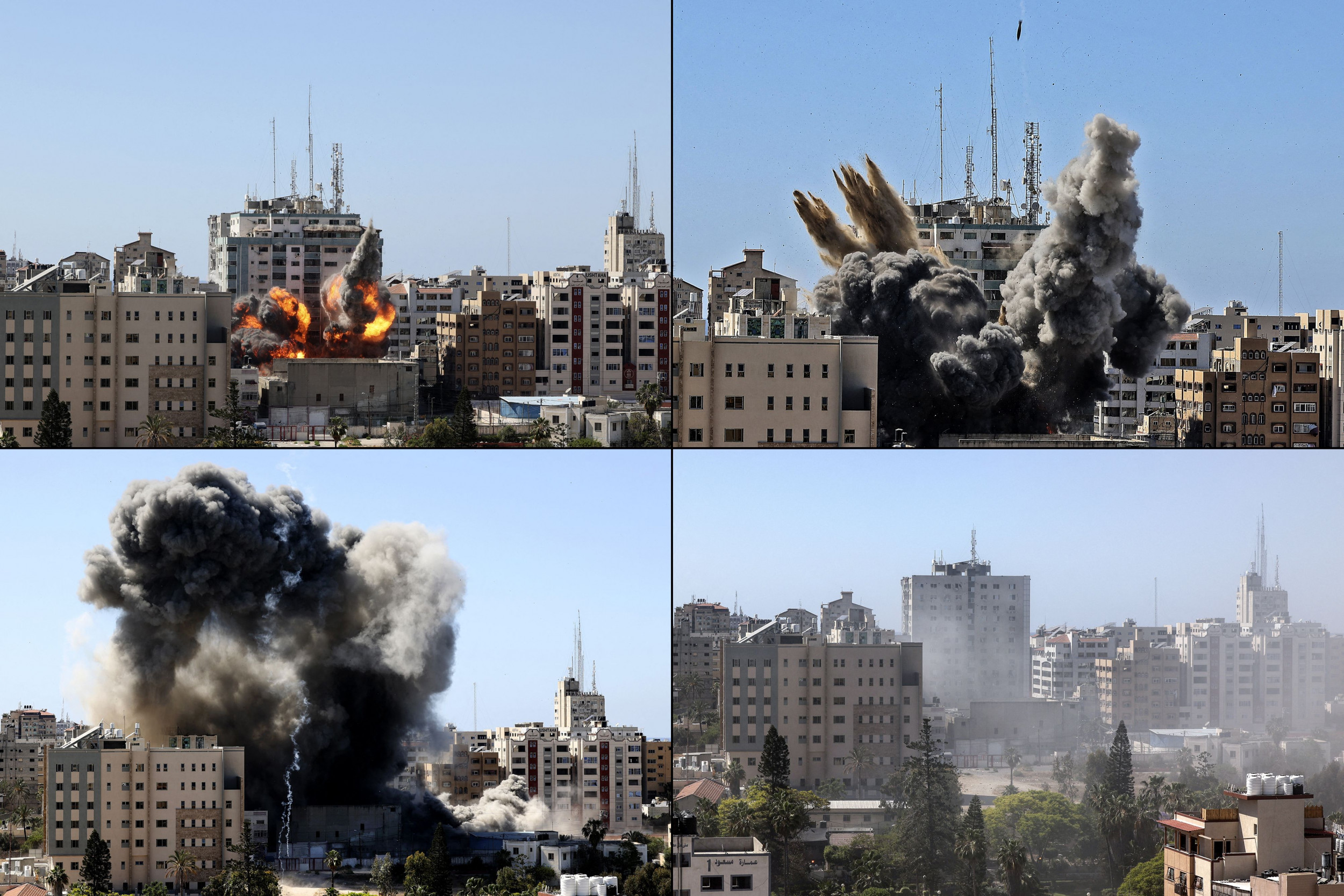 Amid a global outcry, the Israel Defense Forces defended their targeting of an office tower in the Gaza Strip housing international media, arguing that the structure’s main objective was not journalistic but rather to serve as the headquarters for the Hamas movement and other Palestinian factions.

The IDF warned occupants of Gaza’s Al-Jalaa Tower on Saturday that an airstrike was imminent, prompting a futile call by the building owner to delay the attack and the frenzied scenes as Residents, including staff from major news outlets such as the Associated Press and Al Jazeera rushed to retrieve all possible equipment before evacuating.

Less than an hour later, the 12-story structure was reduced to rubble.

The IDF claimed the tower “contained military property belonging to Hamas military intelligence,” making Al-Jalaa a legitimate target in the ongoing conflict that erupted on Monday, as Hamas fired an estimated rocket barrage. nearly 3,000 against Israel, and the IDF blew up the Gaza Strip with attacks now coming from air, land and sea.

The Israeli airstrike has been criticized and condemned by journalists, and has even prompted a call from the White House.

Faced with questions about the operation at a press briefing later Saturday, IDF spokesman Lt. Col. Jonathan Conricus dismissed the idea that the site was protected due to the presence of journalists .

The second was “research and development, where the best subject matter experts operated from inside this building, using the hardware, computers and other facilities inside the building to develop weapons, weapons. military against us too “.

The third concerned “very advanced technological tools which are in or on the building”.

Conricus declined to go into details, but said such tools were used by Hamas “to fight against us in order to hinder or limit IDF activity inside and on Israel. civilian activity with the Gaza envelope â€. He also reiterated the extent to which the IDF has identified how groups like Hamas and the Palestinian Islamic Jihad have integrated their military infrastructure “into civilian facilities”.

Conricus also acknowledged that the pressure for more in-depth answers was “legitimate”, but said he could not go into more detail on the last point at this time “for reasons of source security and not to compromise our collection efforts “.

â€œI can assure you that our information is very accurate,â€ said Conricus. “This is what Hamas and Islamic Jihad were using the building for.”

Conricus also highlighted what he called the IDF’s commitment to ensuring the safety and free work of journalists, even though this degraded the effectiveness of the strike to some extent.

“Out of consideration for the safety of civilians, non-combatants, of course, journalists, then sufficient time was given to these people to evacuate the building, knowing that this time was also used by Hamas and Islamic Jihad. , to recover a lot of very important equipment, “he added,” but this is a military loss that we are prepared to cite and suffer in order to minimize and ensure that there were no civilian casualties in the strike on the building.

Shortly after the fall of the Al-Jalaa Tower in dramatic camera and video footage, media that had occupied the building for years, including three previous wars between Gaza-based Palestinian fighters and Israel, published reports. statements.

Al Jazeera said it “condemns in the strongest terms the bombing and destruction of its offices by the Israeli army in Gaza and considers it a clear act to prevent journalists from fulfilling their sacred duty to inform the world and to report the events on the ground “. The Qatar-based outlet “promises to follow all avenues available to hold the Israeli government accountable for its actions,” calling for international support to do so.

Associated Press chief executive officer Gary Pruitt said his organization was “shocked and horrified that the Israeli military is targeting and destroying the building housing the PA office and other news agencies in Gaza.” . He said the IDF was well aware of the outlet’s office there and called the attack an “incredibly disturbing development” in which employees “narrowly avoided a terrible loss of life.”

“The world will know less about what is going on in Gaza because of what happened today,” Pruitt said.

Pruitt would later receive a call from US Secretary of State Antony Blinken, who conveyed Washington’s official support to him.

The senior American diplomat “offered his unwavering support to independent journalists and media organizations around the world and stressed the indispensable nature of their reporting in conflict zones.” He also “expressed his relief that the Associated Press team on the ground in Gaza remains safe.”

The ramifications of the bombing have spread to even higher levels of the US government, as White House press secretary Jen Psaki said just hours after the incident that the The administration of US President Joe Biden had “communicated directly to the Israelis that ensuring the safety and security of journalists and independent media is a primary responsibility.”

The White House also published a reading of an appeal between the US leader and Israeli Prime Minister Benjamin Netanyahu.

Biden reaffirmed Israel’s right to self-defense, condemned the continued rocket attacks by Hamas, and lamented the loss of life among Israelis and Palestinians. He also “expressed his concerns for the safety and security of journalists and stressed the need to ensure their protection.”

The post was followed minutes later by the reading of an appeal between Biden and Palestinian National Authority President Mahmoud Abbas in which similar sentiments were expressed. In both conversations, Biden reiterated US support for a two-state solution to end the decades-long Israeli-Palestinian conflict peacefully.

But the fight in Gaza seemed far from over as the IDF and Hamas plunged into their worsening struggle. The conflict erupted on Monday as a worsening dispute involving Israeli families trying to expel Palestinians from East Jerusalem, an argument that escalated further by an Israeli raid on the holy Al-Aqsa mosque and continued rocket fire by a coalition of Palestinian groups led by Hamas.

Hamas Al-Qassam Brigades spokesman Abu Obeida said on Friday that the group “has prepared for the bombing of Tel Aviv for six consecutive months, with the help of God” in a statement obtained by News week. In response to the IDF “hitting a civilian tower in Gaza,” Obeida said the group “has directed a rocket barrage at Tel Aviv” and that the townspeople “must stand on one leg and wait for our response to the earthquake â€.

The Israeli army destroyed a number of high-rise buildings believed to be operating on behalf of Palestinian forces. The events surrounding the strike on the Al-Jalaa Tower, however, marked the second such incident exacerbating tensions between the IDF and some international news outlets covering the worst outbreak of violence between Israelis and Palestinians in years.

On Thursday, the IDF announced the entry of ground forces into the conflict for the first time, a development that appeared to mark the start of an invasion that Israeli officials had previously declared. News week and other opportunities had been planned and prepared. The presence of such forces in the Gaza Strip itself was then confirmed to a number of reporters.

Hours later, however, the IDF denied that the incursion had started. An IDF spokesperson provided clarification to News week stating that “there are currently no IDF ground troops inside the Gaza Strip”. Later, Conricus took personal responsibility early on Friday, calling him “an internal communication problem” in which he had passed on the “wrong information”.

A number of Israeli media, however, have suggested foul play. The IDF’s plan, according to these reports, was to intentionally spread false news of an invasion in order to bring Hamas personnel into a vast network of underground tunnels designated by the IDF as “the subway” in order to launch a full series of attacks. strikes that would destroy this underground complex, trapping and possibly killing the Palestinian fighters there.

Ask by News week On Saturday whether the operation involved deceiving foreign media or the Palestinian factions the IDF is fighting with, Conricus said the goal was simply to neutralize Israel’s enemies.

â€œThe purpose of the operation was to kill enemy combatants,â€ Conricus said. “It was the goal.”