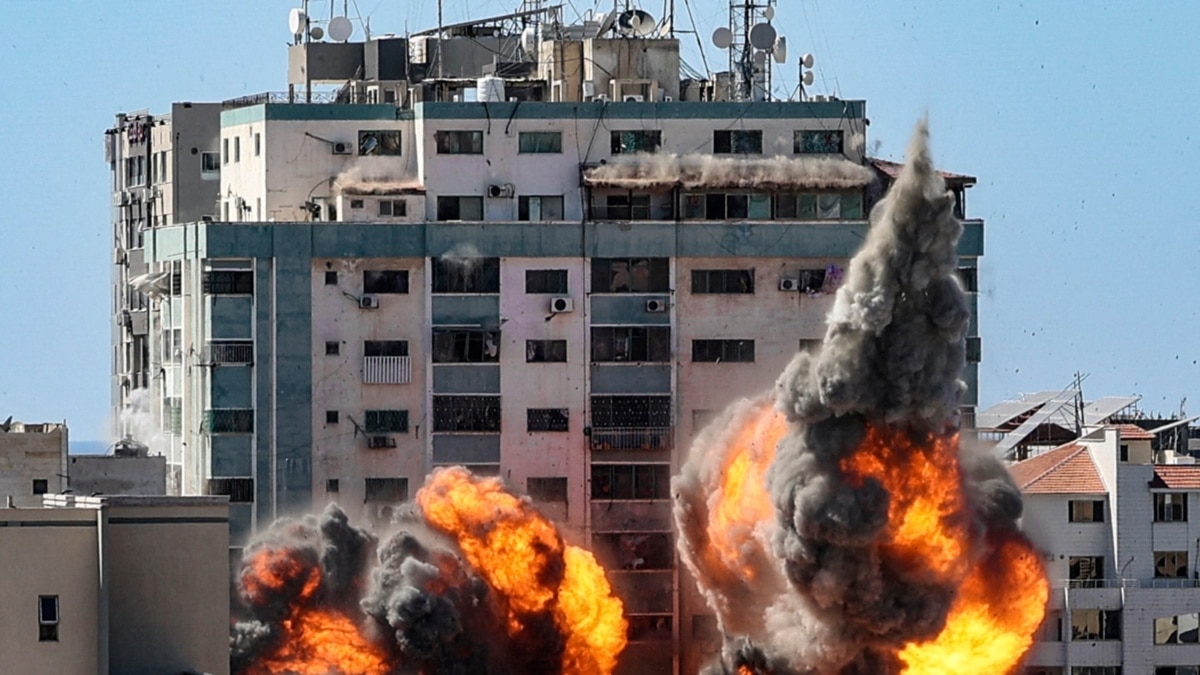 A high-rise building in Gaza City where the Associated Press and Al-Jazeera are based was destroyed by Israeli airstrikes on Saturday, as the worst violence between Israel and Palestinian militants since 2014 continues to escalate.

Israeli planes carried out airstrikes on Gaza and Hamas militants responded by firing rockets at Israel, as violence between the two sides continued for a fifth night.

A 12-story building that housed apartments and other offices in addition to media organizations was hit by Israeli missiles after the owner of the building received a warning over the phone from the IDF an hour before the attack that he would be struck.

PA personnel and other building occupants immediately evacuated the building, but Al-Jazeera continued to broadcast the airstrikes as the building collapsed.

â€œAl-Jazeera will not be silenced,â€ an on-air presenter said. â€œWe can guarantee it to you now. “

AP Chairman and CEO Gary Pruitt said in a statement that the news agency was “shocked and horrified” by Israel’s attack on the building, while noting that it had received a warning from ‘Israel.

Pruitt said the AP was seeking information from Israel and the US State Department on the attack, a dozen of whose employees “narrowly avoided a terrible loss of life.”

“The world will know less about what is happening in Gaza because of what happened today,” Pruitt warned.

The IDF said without evidence that it destroyed the building because intelligence agents from the militant Islamist group Hamas were using the media offices as “human shields.”

White House spokeswoman Jen Psaki tweeted: â€œWe have communicated directly to the Israelis that ensuring the safety and security of journalists and independent media is a primary responsibility. “

US President Joe Biden spoke by phone Saturday with Palestinian President Mahmoud Abbas, their first phone call since Biden took over the presidency of the United States in January.

Biden briefed Abbas on US diplomatic efforts to end the conflict, stressing that Hamas must stop firing rockets at Israel. Biden also stressed his commitment to a “negotiated two-state solution as the best way to achieve a just and lasting resolution of the Israeli-Palestinian conflict,” according to a reading of the White House call.

Also on Saturday, Biden called Israeli Prime Minister Benjamin Netanyahu. He condemned the rocket attacks by Hamas and reaffirmed his support for Israel’s right to defend itself against Hamas and other terrorist groups. He also expressed concern for the safety of journalists and the need to ensure their protection, according to a reading of the White House appeal.

The news agency building was destroyed hours after another Israeli airstrike in a densely populated refugee camp killed at least 10 Palestinians, mostly children. It was the deadliest airstrike since violence began to escalate earlier this week.

Tensions rose further on Saturday as Palestinians celebrated Nakba Day or the day of the catastrophe, commemorating the destruction of the Palestinian homeland in 1948 for the creation of Israel.

Since the fighting began five days ago, at least 139 Palestinians have been killed, including at least 39 children and 22 women, according to the Gaza health ministry. At least eight Israelis were killed in the rocket attacks, including a 6-year-old boy.

The UN Security Council agreed to meet on Sunday to discuss the situation, after plans to secure a meeting were delayed by US concerns.

“The United States will continue to actively engage in diplomacy at the highest level in an attempt to defuse tensions,” US Ambassador to the UN Linda Thomas-Greenfield wrote on Twitter.

A spokesman for the Israeli Embassy in Washington, Elad Strohmayer, said in an interview with VOA Persian that Israel’s Ambassador to the UN, Gilad Erdan, will say at the Council meeting of security that Israel tries to minimize civilian casualties among Palestinians as it fights Hamas.

â€œThe Security Council should not morally equate Israel’s defensive military activities with indiscriminate Hamas war crimes. If we do this equation, Hamas is winning, and we shouldn’t let the international community give Hamas that victory, and the United States is with us on that, â€Strohmayer said.

Israeli officials say most of the Palestinians killed in the airstrikes in Gaza are Hamas fighters, and Hamas has admitted that some of its top commanders were killed by Israel.

Israel has been the subject of international criticism for civilian casualties in three previous wars in Gaza.

UN Secretary-General Antonio Guterres warned on Friday that if the fighting was not stopped, the conflict could “trigger an out of control security and humanitarian crisis” and “further foster extremism”, the spokesman said. from the UN, StÃ©phane Dujarric.

US regional envoy Hady Amr, deputy assistant secretary for Israel and Palestinian affairs, arrived in Israel on Friday as part of the Biden administration’s mediation efforts.

The recent violence is the biggest battle between the Palestinian militant group and Israeli forces since the 2014 war in Gaza. It was sparked by growing unrest over control of Jerusalem and attempts by Jewish settlers to take over Arab-controlled communities.

Global mediation efforts to end the fighting continue with Egyptian officials lobbying Hamas and the United States and others working on Israeli officials in Tel Aviv, according to two Egyptian intelligence officials.

Kambiz Tavana of VOA Persian contributed to this report.