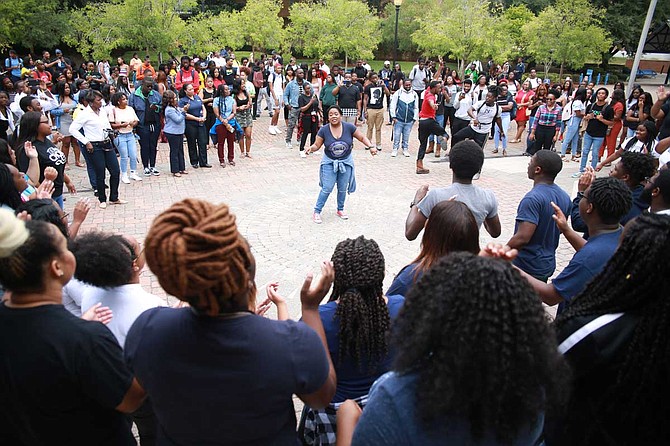 JSU will be holding its Homecoming Yard Fest on Friday, October 11 from 11 a.m. to 6 p.m. The event will feature performances by the Sonic Boom of the South, JSU cheerleaders and JSU Dance Ensemble, as well as food trucks at Gibbs-Green Plaza. . Photo courtesy of JSU

NFL Hall of Fame member Robert “Dr. Doom” Brazile will serve as the Parade Grand Marshal. After graduating from JSU, Brazile played for the Houston Oilers from 1975 to 1985. JSU inducted him into the JSU Sports Hall of Fame in 2003, and he entered the Pro Football Hall of Fame in 2018.

On Thursday, October 10, rap artists Lil Baby and LightSkinKeisha will hold a concert at the Lee E. Williams Athletics and Assembly Center at 7 p.m. .

JSU will be holding its Homecoming Yard Fest on Friday, October 11 from 11 a.m. to 6 p.m. The event will feature performances by the Sonic Boom of the South, JSU cheerleaders and JSU Dance Ensemble, as well as food trucks at Gibbs-Green Plaza. .

The return game between the JSU Tigers and the Alabama State University Hornets is Saturday, October 12 at 2 p.m. at Mississippi Veterans Memorial Stadium.

MaxxSouth Broadband donated $ 440,000 to MSU to build the digital media center and provided an accompanying endowment to support the maintenance of the facility, MSU said in a statement. The MSU Provost’s Office, College of Arts and Sciences and its Communication Department, University Television Center and MSU Libraries also contributed to the renovation.

The MaxxSouth Digital Media Center will include an audio and video recording studio; a makerspace and multimedia lab with 3D printers, two sewing machines, and craft supplies for sewing, knitting, building and modeling; the Center for Advanced Vehicular Systems Mixed Reality Studio, which includes virtual reality stations with Oculus Rifts, Microsoft HoloLenses, and two development computers; a TV broadcast studio for classroom instruction and a weekly live news broadcast by broadcast majors; and a collaborative studio for meetings and study for groups of five or more, as well as individual study areas.

USM launches fundraiser for the Quinlan-Hammond Hall of Honor

The USM Foundation at the University of Southern Mississippi recently launched a campaign to raise $ 2.4 million to construct a new building to house the Quinlan-Hammond Hall of Honor. The new facility will be located at the corner of Thirty-Fifth Avenue and Pearl Street in Hattiesburg.

Quinlan-Hammond is currently located in a renovated 1,600 square foot building on the west side of the Hattiesburg campus, but has outgrown its current space, according to a USM statement. The new Quinlan-Hammond building will be a 5,200 square foot facility with a conference room, study space, library with living room and office, meeting spaces and offices for staff.

The building’s tentative completion date is fall 2021. When complete, the center will accommodate more than 1,700 veteran students, military personnel and their families, the statement said. The university will use all funds raised from construction and furnishing costs to create an endowment to support the center.