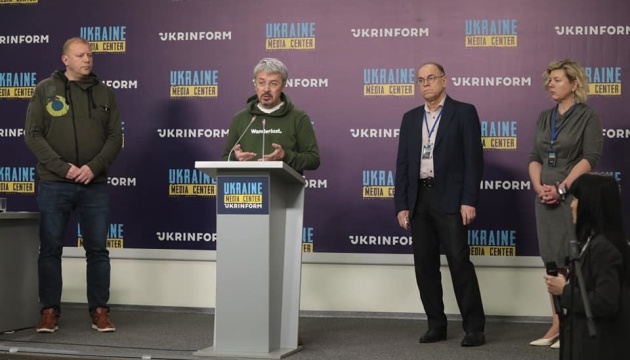 On Saturday, April 30, a joint information project of Ukrinform and Ukraine Media Center was launched.

“We now understand that the war continues and we must join forces to ensure that all journalists on the news front have the opportunity to receive high quality service, to receive information from primary sources,” said Ukrainian Minister of Culture and Information Policy. said Oleksandr Tkachenko during a press conference with the Ukrinform news agency.

According to him, the war is currently taking place not only physically but also in the media landscape. “And the importance of getting first-hand information is also a manifestation of how we are fighting in this war, how we are fighting,” he said.

The Minister noted that the launch of the updated media platform would help organize public and non-public events for media professionals, help foreign media to cover the war, help Ukraine to shaping a successful information policy.

There is also a united group of skeptics who say we have different speeds, different breaths and no chance of union. As you can see, the odds are good,” said Oleksandr Kharchenko, director general of Ukraine’s national news agency Ukrinform.

According to him, “on the one hand, the agency provides a modern technical base and information support, on the other – our partners already have skillful communication with the international journalistic community, and, I would say, an ultra-response -fast to population Combined, it produces a synergistic effect that will allow us to quickly and professionally convey the truth about Ukraine to the world.

According to Kharchenko, the enemy uses many tools against us: forgery, disinformation, information and psychological operations.

“We have only one weapon – accurate, operational and truthful information. But if we use it skillfully and act correctly, they will not resist. And we will do everything correctly,” he said.

Ukrinform will offer our Ukrainian and foreign colleagues:

In turn, Alina Frolova, the representative of the Ukrainian Media Center, stressed that our task is to provide the greatest support to journalists in their work.

“We are really happy that we managed to unite because we believe that the more effort is made to win this information war, the better. Cooperation with journalists, especially foreign journalists, is so important because we have all seen how much the attitude has changed after the events, atrocities in Bucha, Kyiv region The efforts of foreign journalists accredited in Ukraine (more than 7,000 have already been accredited in Ukraine) have made these events known to the world and effectively influenced the policies of key countries. They influenced the supplies of weapons, the support that was provided to us and the formation of such a great coalition,” Frolova said.

The project is a combination of government efforts and community initiatives.