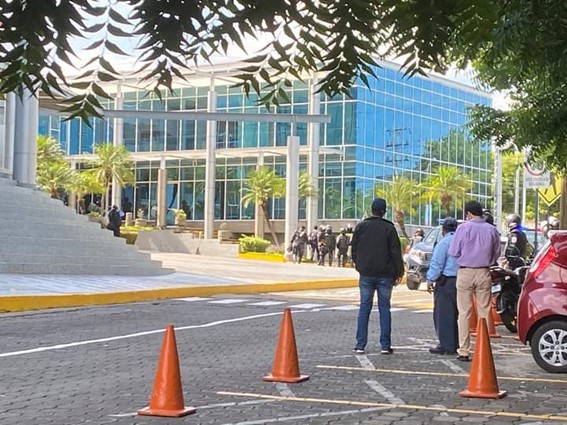 Carlos F. Chamorro: “The truth is under attack”

HAVANA TIME – The police of the Ortega regime on Thursday, May 20 raided the recording studio of online television programs Esta Semana and Esta Noche, directed by journalist Carlos Fernando Chamorro. Staff had temporarily moved into a small space in the Invercasa business center, after the raid and confiscation of their offices, as well as that of Confidencial, in December 2018.

Cameraman Leonel Gutierrez, a member of the Esta Semana and Confidencial team, was in the studio at the time of the attack and is being illegally detained.

“This is the second time that the dictatorship has launched a frontal attack against this media, which was illegally raided at dawn on December 13, 2018, when they stole everything from us (…)”, denounced Chamorro , also director of Confidencial.

At around 9 a.m. this morning, riot police surrounded one of the towers of Invercasa’s business center. An hour and a half later, they started removing the boxes and equipment from the recording studio. Police did not provide any justification for the raid.

â€œWe want to see Leonel Gutierrez, we want his release. At the moment, he is being held, kidnapped by the police. We were unable to have any contact with him. Likewise, we want the equipment and other goods they stolen to be returned, â€Chamorro demanded.

At noon, after taking the boxes, computers, television cameras and editing equipment, Leonel Gutierrez was seen outside the Invercasa tower and was then placed in a van of the infamous â€œEl Chipoteâ€ interrogation prison. No evidence of physical aggression was observed. The reasons for his detention by the police are still unknown.

AFP photographer Luis Sequiera was also temporarily detained by police as he tried to cover up the assault.

“They are not going to silence us, we will continue to report”

Carlos F. Chamorro noted, â€œWhat we see today does not respond to any law, we cannot find any rational justification. However, there is nothing new happening. It didn’t start today. It started decades ago.

During a live broadcast of the Confidencial show on Radio Corporacion, Chamorro stressed that “they are not going to silence us, they can steal other television cameras, other equipment, they can occupy a room. where we had made some productions, but we will continue to inform, they will not silence our journalists â€, he underlined.

A few hours earlier, Chamorro had denounced via his Twitter account that “the Confidencial offices are surrounded by riot police” and demanded “respect for the physical integrity of our journalists and respect for our equipment”.

â€œTwo years ago they attacked and confiscated us, but they never shut us up. We will continue to report, â€said Chamorro.

Hours before the new illegal raid on Confidencial, the Interior Ministry, under the orders of Daniel Ortega, accused the Violeta Barrios de Chamorro Foundation of alleged money laundering. At the same time, the police raided its offices, although this organization closed in February due to obstacles imposed by the law on foreign agents.

In December 2018, Ortega police robbed and illegally occupied confidential facilities, which two years later were handed over to the Ministry of Health, which turned it into a â€œfrontâ€ maternity hospital, consuming the confiscation of the facilities. .