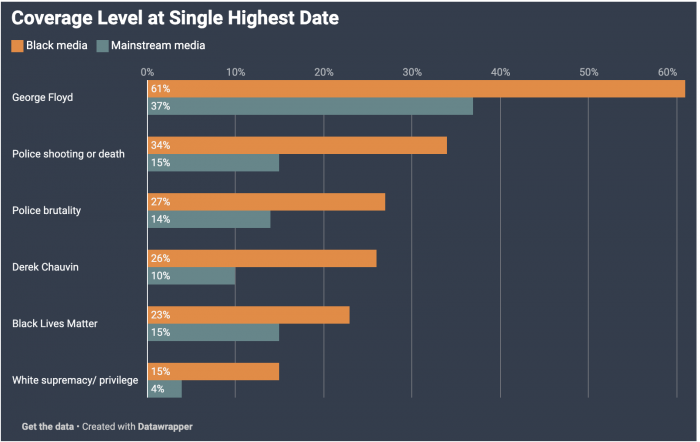 Black media publishes on issues of importance to black communities much more often – up to six times more – than other media. That’s one of the main findings of a new report released last week by the Black Media Initiative of the Center for Community Media at the Craig Newmark Graduate School of Journalism at New York University.

To compile the new report, titled “Why Black Media Matters Now,” the researchers examined nearly 100 African-American media sources during the 15-month period between March 1, 2020 and May 1, 2021. In total, the report’s authors reviewed nearly 180,000 of the articles. The report was also compiled with five key areas of coverage in mind – Covid-19, Health, Racism, Politics, Culture and Identity – and the researchers created additional sub-themes for each of these main areas.

Here are the main conclusions that emerged:

Black media paves the way for stories related to racism, emphasizing these stories at higher levels and earlier in the news cycle than mainstream media.

Black media centers the community in coverage and humanizes individuals and groups in the news.
– Black media frequently used the word “Black” in coverage, in an explicit designation of black people and communities to report the news. The word “black” was consistently in the top 100 most frequently used words on a variety of topics, and in many cases was particularly prevalent compared to the words most used by mainstream media.
– Black media has always emphasized certain social identities for a variety of topics – community, family, women and children in the first place. The mainstream media did not use these words with similar frequency.
– Black media connects current events through topics to cover broader issues of injustice, including threats to access to the vote, disparities in medical care, policing and l mass imprisonment.
– Black media provide historical context to current challenges. This is done by explicitly including historical events in the latest related news, as well as by linking related news events such as the police murders of blacks.

More from the report:

The highest day of black media coverage of the topic of racism was June 14, 2020, when coverage reached 68% of stories amid a massive national response to the murder of George Floyd. This is twice the level of the highest date in mainstream media, when coverage reached 34% on June 7, 2020. Between late May and early June 2020, at the height of the news cycle around the Floyd’s murder, levels of racism coverage have peaked. the subthemes were consistently twice as numerous in black media as in mainstream media.

These disparities in coverage also persisted for the other four subjects.

The report also found differences in the language used by different types of media. Black media tended to use humanizing language more frequently than mainstream media. Terms such as “victims” in the coverage of police brutality and “son” in the coverage of police shootings were among the 100 most used words in black media reports, but were not so important in the reports. mainstream media reports.

Stories featured in black media were also uniquely focused on Black identity and community, particularly with a focus on children and women. “Child,” “children” or “youth” was in the top 100 most frequently used words in black media coverage, but not in mainstream media, for coverage of topics such as racism (especially l ‘mass incarceration) and politics (especially immigration stories).

Finally, the report found that black media tended to create story arcs that linked current events to larger issues such as systemic injustice. The figure below shows the keyword â€œjusticeâ€ in the context of black media coverage of religion, which was one of the issues where â€œjusticeâ€ was particularly prevalent.

This technique was particularly prevalent when it came to police killings, where mention of previous victims was included in stories of new killings.

The researchers behind the report conclude that while the results are not entirely surprising, they underscore how the black media plays a vital role in supporting and amplifying issues important to the black community. Still, there are some unanswered questions that this research does not yet answer: