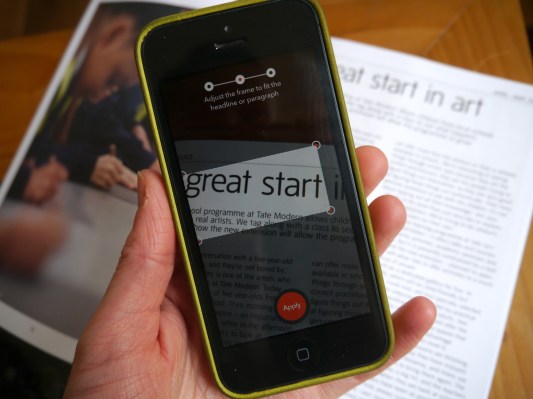 It may surprise you, but the print media is not dead yet. Hell – some people even As read the ink of the pulp tree. And this curious fact is something British startup Peekster intends to profit – with an app (yes, it’s still an app) that connects offline reading habits with online socializing and sharing habits to appeal to old-school readers and editors .

We’ve covered this startup before, as a graduate of last year’s Wayra UK Accelerator Admission. But today, Peekster is strutting the stage at TechCrunch Disrupt NY in our battlefield competition, and just announced the launch of their app in the United States today.

Peekster’s launch publications in the United States are The New York Times, The Wall Street Journal and The Washington Post, which join the six existing UK publications (The Times, Independent, Metro, The Guardian, the London Evening Standard and City AM ) already supported by the application.

Peekster users who enjoy reading these scholarly journals in the form of a dead tree will be able to pull out their smartphone and digitally “cut” an article from the print edition they are reading by scanning a few words from the title or first paragraph. .

When I say “clip” – what Peekster calls markup – I mean that the app will locate the digital version of the article a user is reading so that they can share it online with their social networks, or l ‘save for later reading (Peekster integrates with read -it-later services such as Pocket and Instapaper for this). In other words, the app allows a newspaper reader to connect their offline reading with their online identity and networks.

The iOS app uses optical character recognition to determine what the iPhone’s camera is pointing to and direct the user to the correct article online. When the content of a post is not currently linked within the app, Peekster will suggest related related posts based on the words the user scanned – so you can use it as a content discovery engine as well. related, if you wish.

On the discoverability front, the app also curates a real-time list of popular tags, based on what the Peekster user community is scanning. Its business case to publishers is therefore that it can also help attract new readers, as well as connect their offline readers to their online content.

To be clear, Peekster says he does not maintain a database of publisher content himself (to avoid copyright issues). It’s either looking at a publication’s RSS feed to locate the content a user is looking for, or doing a web search, says co-founder Tine Hamler. Although he adds that he does indexing of titles and URLs to speed up internal searches.

Since there is no database to build, the only real reason Peekster limits the number of publications whose content is accessible in its application is for business model reasons. Ultimately, he hopes he can persuade a subset of publishers to pay for the privilege of having their content in front of Peekster’s audience.

But to do that, it needs a big enough audience to get publishers to pay – so that chicken / egg isn’t here yet.

Peekster needs content to engage readers, of course – so it starts off by offering a limited selection of content from mainstream publishers without them having to pay for it, in the hope that the ability to localize their content will be there. will help amass enough users to get more. publishers interested in paying for content to be accessible in the app. (That’s one of the reasons he’s focused on adding free newspapers to the UK, Hamler explains, because of the potential volume of readers it brings in.)

Peekster does not currently publish the number of users of the app, but the app didn’t launch until last November, so that’s not too surprising. Hamler says his percentage of active weekly users is around 15% and this is also something he will need to increase if he is to make himself attractive enough to get publishers to pay. The startup itself was founded in May 2013, on selection by Wayra UK

It is also its only funding to date. Now, after Wayra, Hamler says he’s looking to raise half a million dollars in seed money and is currently meeting with investors – hoping he can close the round in about four months.

In the future, publishers will have to advertise their content, not only for their brand, but also for the content; the articles themselves

While you might think it’s a retrograde choice for a startup to build a digital business on a very long-in-the-tooth (print) media format, Hamler argues that there is life left in the tree media. death – and, in the longer term, an opportunity to provide publishers with technology to help them promote and sell individual articles in a predominantly digital future.

“We’ve seen a lot of people read newspapers in the subways, on public transport … and we’ve done market research and found that people still prefer print over digital when they go to work,” he said, explaining the genesis of Peekster’s idea. . â€œPeople over 35 are still big print consumers, so we checked the market and 80% of the entire publishing industry is still in print, and only 20% is in digital subscription.

â€œPrint also generates most of the revenue for publishers, so we wondered why? Why not try to make the impression more interesting – why not include popular internet services, like sharing stuff, like saving stuff. “

But Peekster’s grand vision goes beyond the current generation of print media – so ultimately unrelated to print publications. The creators of the app envision a future where large publishers need new ways to flag and distribute their content in an increasingly crowded digital content marketplace.

â€œPrinting is on the decline, but right now it’s still a pretty huge market,â€ says Hamler. â€œBut in the future, we think we’ll see a big change in content distribution because all the content will be online and it will be difficult to stand out and be foundâ€¦ We want to play a part in that. Our idea is that in the future, publishers will have to advertise their content, not only for their brand, but also for the content; the articles themselves.

Hamler points to billboard advertising campaigns that have been run by The Economist which present different angles of a story and encourage viewers to text certain keywords to receive a copy of the post as an example of the type of advertising that large publishers are increasingly going to need to look to, to generate interest in their content.

â€œI think print will go down that route – that content will be advertised on billboards and so on. This will be great for Peekster because you can just scan the display panel and basically buy this item with an in-app purchase, â€he adds.

In the meantime, until we enable a future where readers pay per article (at least from publications that can afford to advertise their products on billboards), Peekster has several revenue streams in mind – including, hopefully in the short term, being able to persuade small publishers to pay for their content to be included in its application.

It also already collects income from other sources. Its base app is freemium, but some advanced features (such as exporting content to other services and offline mode functionality) require an in-app purchase to unlock them. It also earns revenue from serving promoted content in its app, charging a per click fee on that.

Another possible source of revenue for the company is to provide “Google Analytics” type services to print publishers, on the type of articles people read in print newspapers and magazines.

Hamler says he might also consider licensing his technology (via an API) to publishers so they can add his “scan and tag” feature in their own apps – but he says the publishers he has spoken with so far. ‘now seem to prefer the concept of a stand-alone, independent service, which offers the possibility of attracting new readers, and not just serving an existing readership.

Question: Why did you first go to the newspaper market rather than billboards?
A: We see Peekster and the print media as a great engine to introduce Peekster to the public, as we can also count on the support of publishers to promote their content.

Question: Do you see any print publications that support it? It seems to me that going to consumers and changing their behavior is much more difficult than going to publishers and telling them to use this as a white label solution …
A: We receive offers from white label publishers.

Question: One aspect [of your pitch] Is it in places where people don’t use their device, but you also expect people to use their device, so there’s a bit of a disconnect there – so where are the people who share? And it also looks like you really need the long tail of content? So how do you coach the user to use it?
A: Peekster is intended for print readers. They therefore consume printed content. Peekster is only there for the second the reader wants to share something on social media.

If we can’t find the right article for you, we always suggest three similar stories so you can choose other articles from other publishers.

Question: Do you support in-app reading, like Pocket?
A: We link you directly to the website, but in the future we offer the option to remove all the clutter from the website and then save it to Evernote or Pocket or things like that.

Question: Do you see people coming back? Is there a way to get users more often than just typing in a title to share it?
A: Peekster is also widely used for content discovery – as you saw in the demo, we provide this popular list, so you don’t need your print journal to discover new content.

Question: You do OCR, so why can’t you just google it and find the article that way?
A: We’ve built a custom search that only includes publishers.

Question: What kind of user data do you have to show that customers are sticking with it? It seems to me that you are solving a problem that may not be a problem …
A: People read print because they love print. We have 25% of our users are weekly active users.