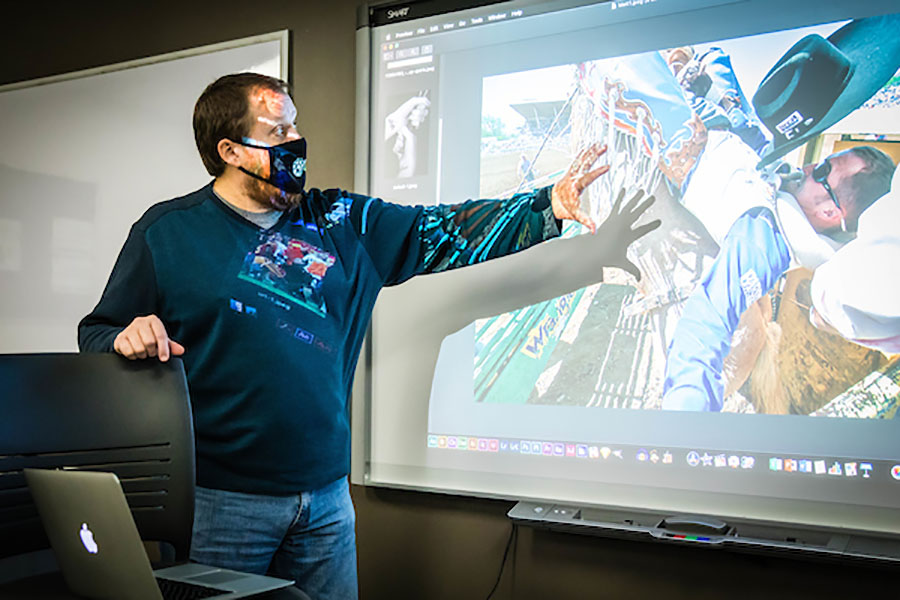 Growing up, the golden fields held mysteries for Jason Offutt that led to a life of writing and teaching at Northwest Missouri State University.

Last month, Offutt, a senior mass media instructor, released his 16th book and first horror fiction, “The Girl in the Corn.” The book features a young man who must work alongside a fairy to tell right from wrong in order to save the world.

The novel communicates a disturbing message that evil can be found where you least expect it.

“That means evil isn’t always the creature that lurks in the darkness,” Offutt said. “It can be something pretty that’s right in front of you.”

Offutt’s inspiration for “The Girl in the Corn” comes from her 7-year-old daughter, who is obsessed with Disney princesses and other fairy tale characters. Offutt, a self-proclaimed nerd, researched fairy tales and discovered that fairies don’t fit into the Disney genre because they’re traditionally mischievous creatures.

The Orrick, Missouri native drew on his upbringing as a farmer to construct an eerie scene for his characters. When he was a child, Offutt’s parents urged him not to play in cornfields where coyotes and other animals might harm him. His interest in the mystery of the cornfields led him to the title of the book.

“I’ve always been a voracious reader, even as a child,” he said. “As soon as I learned to read, I read on my own and when I was 10, I remember telling my mother and father that I wanted to write books when I grew up, and they found it’s hilarious. It’s always been a goal. I can’t remember not writing or wanting to pursue that goal.

Following his father and attending college himself, Offutt wanted to escape the farm. He began his professional career as a print journalist, a profession in which he worked for 17 years before entering the field of education. Offutt always wanted to be a teacher, but he thought it was important to have done the job that he would teach others to do. He started teaching at Northwest in 2005 – the same year he published his first book.

As Offutt gained experience in writing and editing, he grew accustomed to the non-fiction genre and wanted to branch out. His previous four novels were humorous science fiction, but Offutt wanted to prove to himself that he could conquer a range of genres.

“I’ve always been fascinated by sci-fi, horror, fantasy,” he said. “These are the books I grew up reading. They were the kind of movies I grew up watching and wanted to tell my own stories.

The mass media instructor pursued his interest by writing magazine and website articles to keep his skills up to date. Publishing books has earned Offutt the credibility he uses in the classroom to keep students engaged, and he has a collection of works to support his teaching.

Offutt uses his summer and winter holidays to write as he prioritizes teaching during the school year.

“I’m what you call pants,” he said. “You have your pants flying by the seat of their pants and the plotters describing everything. I have a general idea of ​​where I’m going. I have my characters in my head, and I let them do what they do, and the story unfolds for me as I write it, just as it unfolds for the reader. It’s really cool not knowing what’s going to happen next until it does.

Although Offutt fell in love with the writing process, he discovered that it wasn’t always that simple.

“It wasn’t until I graduated (college) that I realized, ‘Wow, I’m not very good at all,'” Offutt said. “So I’ve spent years studying the art of writing and I always try to improve everything I write. I don’t think any of us will reach a point where we’ll be the We are all still learning and improving.

Offutt emphasizes perseverance as a necessity.

To learn more about Jason Offutt and his writings, visit www.jasonoffutt.com.

Lakeland Bancorp, Inc. (NASDAQ:LBAI) is expected to report earnings of $0.33 per share