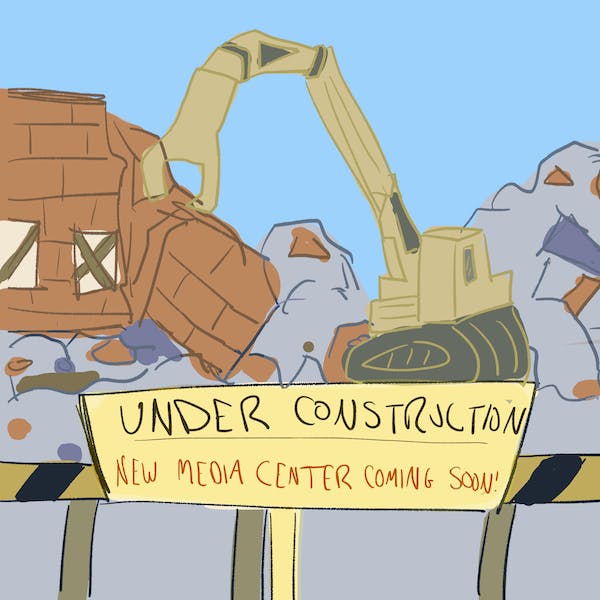 The university administration has confirmed that the Rice Media Center will be demolished by the end of this calendar year after stating an uncertain schedule last September. Kevin Kirby, vice president of administration, said an architectural firm named Diller Scofidio + Renfro has been selected for the new building and the design process will begin in August this year. The building will be ready to open in about three years.

“[Diller Scofidio + Renfro] were selected after a design competition, â€Kirby said. â€œThe main architect is Charles Renfro, and he graduated from Rice. The design process takes about a year, then [it] takes about two years to build, maybe a little faster.

Kirby said Rice Media Center was built to be temporary and that many problems have now occurred over the past 10 years. When the demolition of the center was first announced, Kirby revealed that the building had required $ 800,000 in maintenance and repairs in the past three years alone due to issues such as water leaks and faulty air conditioning.

â€œIt’s a 50-year-old building that was supposed to be a temporary building,â€ Kirby said. â€œIt opened in 1970, and we’ve had a lot of issues with the building over the past decade, [like] maintenance issues. It’s just at the end of its useful life.

In preparation for the demolition and construction of the new building, professors and staff who previously occupied the media center have been relocated. Photography professor Geoff Winningham said he planned to move his darkroom in August of last year, but the main move didn’t take place until January.

â€œThe equipment for the main darkroom and digital lab has moved from the end of January,â€ Winningham said. ” January and February [was] so when we were moving the equipment it was a big job because there is a lot of equipment and a lot of stuff to move in the media center. It took over a month to finish everything.

â€œThe university has spent a lot of time and money making this temporary darkroom,â€ Winningham said. â€œAnd although it’s smaller, it will be just as good as the darkroom we had before. And it’s closer to the center of the campus. It would be easier for the students so that they don’t have to go to the media center. It will be operational by this summer. All the equipment is there, all the plumbing and electrical is installed, so it’s almost ready to go.

Winningham said a new VADA building will help connect art departments and allow them to learn from each other. In the past, the Rice Media Center has been used primarily by the photography and film departments, while other visual arts classes have always been held at Sewall Hall. Winningham said he hopes to find more inspiration for his photography by being able to observe other visual artists in the print studio, which will be within walking distance of the new VADA building.

â€œWe will all be working in the same place that painters, sculptors, printmakers and filmmakers all work,â€ Winningham said. â€œThey can be on a different floor. They might be down the hall, but we’ll all be in one place. So we will all learn from each other.

Brian Huberman, a film teacher, said he hopes to have a space in the new VADA building that allows adequate noise levels for film editing, which requires constantly rewinding and reviewing films. After moving his office to Sewall Hall, Huberman said he still wears headphones now so he doesn’t take over everyone’s space.

â€œOur movie is loud,â€ Huberman said. â€œEditing movies is a nightmare for those around it, because you’re constantly replaying stuff over and over again to see how the edits work. And maybe your movie has bugles and trumpets like my current documentary, and they are loudâ€¦ For the future, I hope there will be some recognition that people in cinema need something. different. We must be able to scream [and] make noise.”

Huberman also hopes the new building will have a design that promotes communication between faculty and students like the Rice Media Center.

â€œWhat’s great about the current design of the media center is that all of the major elements of the program really come together,â€ Huberman said. â€œMy office is where I work and where I have my assembly facilities, and it’s right there at the heart of [the center], so the students who are there just have to take a few steps, and I am there for them. And that way, you’re not always limited by connections during office hours or having to make an appointment like they do now. I hope the new building respects the design of the old one in this sense.

After moving to Sewall Hall, Huberman plans to teach FILM 444: Handmade Film next semester. He says it’s a difficult course to teach due to the space required and the equipment required.

â€œWe need a messy space,â€ Huberman said. â€œBecause besides making films, they also work on film as a plastic medium, painting on it and sticking stuff on it and exploring the many different approaches to filmmaking. Maybe we’ll just push into the sculpture yard which now has these areas covered. Maybe we’ll colonize some of these spaces and have the students do [the work]. Because back in the days of the media center, when the weather was good, then we would go out and they would paint on the film.

Huberman said there would be some activity around the media center before it was demolished, including a potential final screening of “Last Night at the Alamo,” a 1983 film co-directed by the influential filmmaker. Texas freelance Eagle Pennell on which Huberman worked as a director of photography. As the final days of the media center loom, Huberman reflects on his long careers at Houston and Rice.

â€œI am going through a period of mourning,â€ Huberman said. â€œI’ve been working in the media center, I think, for 46 years. It’s like my whole professional life has been in this building, so it’s kind of a life experience. I came from England to Texas in 1975 to fill the post, so the demise of the media center is the end of an era, certainly, for me.

While full of nostalgia for the old media center, Huberman is also excited about the new adventure the department will have in the future.

“We [should] Remember to reinvest some of that energy in the next stage in the life of the film program which will now be very much integrated into the artistic department, â€said Huberman. â€œIt’s a new adventure.