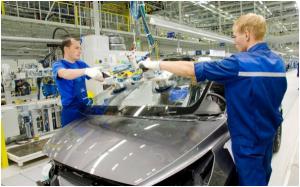 The minister reportedly said that Hyundai-Kia and Habal had reduced production somewhat, but continued to roll out cars at Avtotor. He added that Hyundai Motor also produced cars at its plant in St. Petersburg.

Avtotor is an automobile manufacturing company located in Kaliningrad Oblast, Russia. Prior to the Russian invasion of Ukraine, Hyundai Motor and Kia contracted production of certain models to Avtotor. Hyundai Motor operated its own production plant in St. Petersburg. However, after the Ukrainian war, production was officially stopped.

Hyundai Motor refuted Manturov’s comments, saying they were baseless. “The St. Petersburg plant has been suspended and we have not yet decided whether to reopen it,” he said.

Hyundai Motor ceased operating its plant in St. Petersburg since last month as the supply of key parts was cut off due to international sanctions against Russia.

The Russian market accounts for around 5% of Hyundai Motor’s total global sales. The company said on its first-quarter earnings conference call on April 25 that its sales in Russia were down 25% in the first quarter from a year earlier.