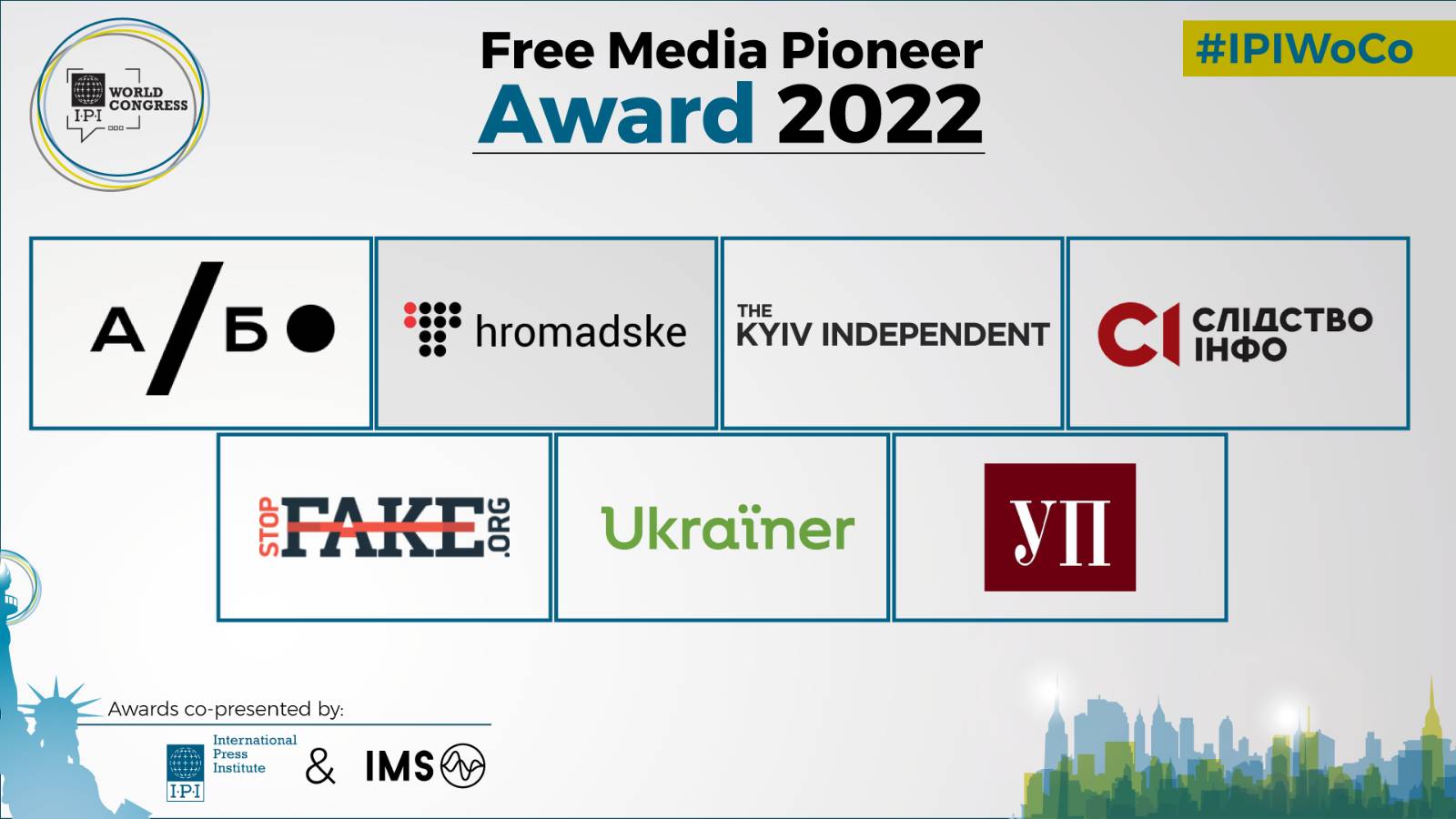 Seven independent Ukrainian media outlets who have risen to face the challenges and dangers of Russia’s war of aggression head-on with courage, quality reporting and an unwavering commitment to serving local communities at a time of dire need are the recipients of the 2022 IPI- IMS Free Media Pioneer Awards.

These are: ABO, Hromadske, Slidstvo.info, StopFake, The Kyiv Independent, Ukraїner and Ukrainska Pravda.

The IPI-IMS Free Media Pioneer Award is given to organizations that meet the demands of the moment through innovative models of journalism, media or press freedom advocacy. They are forging new ways of thinking about the free flow of information to strengthen independent journalism and meet the needs of their communities. The International Press Institute (IPI) established the Free Media Pioneer Award in 1996. It is now awarded annually in partnership with International Media Support (IMS).

Independent journalism in Ukraine has played a key role in promoting democracy and press freedom even before the full-scale Russian invasion, battling against the country’s oligarch-dominated media field. Innovative storytelling, strong business models, extensive networks and a commitment to independence have enabled the company to continue to provide local and international audiences with important news and information despite the war in Russia.

The International Jury of the IPI-IMS Awards chose to honor the creativity and bravery of Ukraine’s independent media and wanted to recognize how Ukrainian media have been able to quickly adapt to meet the needs of their communities and the realities of the war, offering a model of the resilience and courage that inspired the world.

The jury chose to highlight seven nominated media that represent the diversity of Ukraine’s independent media community. These outlets strive to provide much-needed high-quality journalism while combating pro-Kremlin propaganda, struggling with insufficient resources and risking their lives on the front lines. Each of these publications plays a unique role in bringing news and information to the public, and together they render invaluable service in keeping their communities and beyond informed in times of war. Finally, while this prize is awarded to a group of seven media who have been nominated, the jury is aware of the valuable contributions of other independent media in Ukraine.

This year’s Free Media Pioneer Award will be presented along with IPI’s World Press Freedom Hero Award at a special ceremony during the IPI World Congress 2022 at Columbia University in New York City on the evening of 9 september.

The Local Media Development Agency ABO was established in 2017 after Ukraine passed a law to remove state influence over municipal and state publishers. ABO’s content management system, ‘The City’, has enabled local newsrooms to digitize their content. Today, the network has 45 local publishers and more than 300 media professionals.

After the start of the war, ABO launched a new platform called Evacuation.city to give the local public the necessary practical information about aid, social payments and accommodation in Ukraine and abroad, and has hired 30 editors and reporters who lost their previous jobs due to the war.

In addition, ABO launched two new platforms and a YouTube channel to document the stories of war victims and provide English translations of top-performing stories from local newsrooms, resulting in a significant increase in the number of hearing.

ABO’s business model relies primarily on foreign donations due to a decline in its revenue from consulting services and advertising.

Launched on the eve of some of the most turbulent days in the country’s history, just before the Dignity Revolution of 2014, digital broadcasting station Hromadske has become the go-to medium for young Ukrainians in particular, offering an independent alternative and criticism of the oligarch. dominated media.

Hromadske continued to broadcast despite the Russian invasion and provides vital information about the war, including stories about people whose lives were changed. In May 2022, the outlet relaunched its English version.

Hromadske covers important social issues, including minority rights, and has revolutionized the digital media landscape in Ukraine on a tight financial budget. The station is funded by non-profit organizations in Ukraine and abroad.

Before the war, Slidstvo.info was a small investigative media outlet known for its in-depth reporting, focusing on stories of corruption and crimes committed by Ukrainian public officials, who sometimes faced reprisals from the authorities. After the invasion of Russia, the medium focused on war crimes coverage and producing daily content.

Despite financial difficulties, Slidstvo.info was able to publish extremely detailed reports on the war, using its connections with international journalists, civil society organizations and ordinary Ukrainians to achieve its goals.

Due to the war, many previously opened government files are now closed, creating challenges for investigative media such as Slidstvo.info. Nevertheless, the outlet continues to seek new opportunities to expose potential corruption, seeking to report on possible efforts to rebuild the country.

Today, the team of journalists, editors, IT specialists and translators fact-checks, debunks, edits, translates, researches and disseminates information through various platforms in 13 languages.

The Kyiv Independent was founded just three months before the large-scale invasion of journalists who quit the Kyiv Post in protest at alleged editorial interference. Shortly thereafter, the Kyiv Independent became Ukraine’s leading English-language media outlet, becoming an essential source of information for readers around the world about the war.

Since Russia invaded Ukraine in February, the Kyiv Independent has written about the people and places destroyed by the Russian military while establishing a news agency that helps promote a free press in the country.

The media created new and innovative strategies to generate revenue through crowdfunding and partnerships with different companies around the world, and also sought to help other local media through a fundraising campaign. Faced with protracted conflict, the Kyiv Independent is aiming for long-term stability and expanding the size of its editorial staff.

Ukraїner is an innovative media project offering high quality journalism in multiple languages, including coverage of multiculturalism and marginalized groups. The outlet’s content features Ukrainians of different backgrounds, social status, geography and gender in the form of creative storytelling, including videos and photographs. The project aims to help define the importance of Ukraine to Ukrainians, telling stories from all corners of the country.

More than 200 volunteers create content for the platform, whose business model is based on donations and business partners. After the start of the war, Ukraїner transformed from a platform focused on travel and leisure to a news outlet, adapting to the changing needs of its audience.

Ukrainska Pravda (UP), one of Ukraine’s largest online daily newspapers, is renowned for its independent reporting. With the increasing likelihood of conflict in early February 2022, the outlet, like many others, began preparing, purchasing security equipment, new facilities and other supplies.

In February 2022, UP saw a record number of readers on its website and released an English version of the site the same day. Despite this, UP and many other outlets faced serious financial difficulties as their revenues plummeted due to the collapse of the Ukrainian advertising market.

The outlet successfully applied for grants to continue operations due to its size and influence in Ukraine. In particular, he used his position to help small news outlets. UP’s English coverage has also created partnerships with foreign news aggregators such as Yahoo! News and SmartNews.

“Since the start of this horrible war of aggression, the IPI global network has stood in solidarity with our colleagues in Ukraine. The country’s independent media has shown extraordinary courage and resilience in continuing to do its job – telling the stories Ukraine and the world need to hear and adapting to meet the changing needs of their communities. They deserve our recognition and our strongest support.

“Today, Ukraine is fighting not only for its freedom but also for democratic principles as such. Some Ukrainian journalists have joined the military, but many of them are fighting for their rights as free media, to tell the truth and to document war crimes for both Ukrainians and the rest of the world in a way professional and ethical, which is extremely important now. With this award, we should honor their courage, their dedication to fighting for freedom of expression and resisting information warfare.