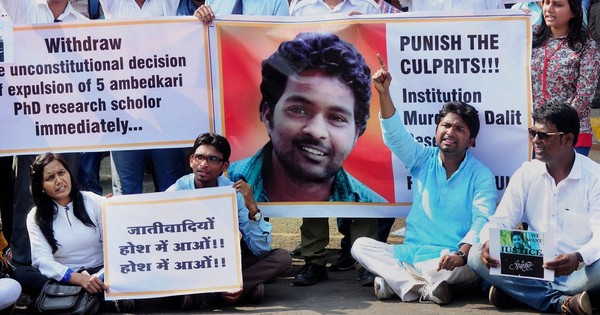 Hyderabad Central University is once again witnessing a confrontation between students demanding justice for Rohith Vemula and the administration they blame for the suicide of the Dalit scholar in January.

On Tuesday and Wednesday, students had no food, electricity or water on campus as non-teaching staff got to work. Many students have been assaulted by police on campus, and at least 30 of them have been arrested for allegedly vandalizing the vice-chancellor’s office.

Students say the university administration has turned the campus into a “concentration camp,” but few people are showing their support. On social media, they highlighted the contrast between the heavy media coverage Jawaharlal Nehru University received after its students were accused of sedition and the lack of reporting on Hyderabad University.

“Threats of rape are made against female students and Muslim students are labeled as terrorists”, wrote Vaikhari Aryat, a student at the Central University of Hyderabad. â€œNobody even bother to report. About 36 people, including 3 faculties, are missing after their arrest by the police. Are you interested? Students are denied food, water, electricity, internet, travel, and ATMs for more than 24 hours. This university has turned into a concentration camp where you imprison your own students. Are you even listening? “

â€œI don’t see anyone defending UoH,â€ Aryat added. â€œI don’t see any ‘UoH idea’ being celebrated. I’m not worried and I’m not surprised either. I know you’ll wake up when one of us dies. You need victims to celebrate, not warriors.

Student unrest escalated this week when Vice-Chancellor Appa Rao Podile returned to duty after a two-month leave period. Podile had gone on “indefinite leave” on January 24, as protests erupted over Vemula’s suicide, with a number of students accusing the administrator of death. Urge students to resign and Parliament to pass the Rohith Act, a law aimed at preventing caste-based prejudice in educational institutions.

The new campaign has received support from JNU as well as other institutions such as Osmania University and Hyderabad University of English and Foreign Languages. Kanhaiya Kumar, president of the JNU student union, arrived at Hyderabad Central University to speak to the students on Wednesday, but the administration denied him and other foreigners entry.

On Thursday, according to NDTV, a shoe was thrown at Kumar as he prepared to address a conference in Hyderabad. “The offender, a cow protection activist named Naresh Kumar, was kicked out by the police,” the news channel‘s website said. noted.

Kumar’s visit to Hyderabad garnered some attention in the national print media on Thursday, but the student unrest was largely ignored.

Here’s a look at the coverage of some of the major newspapers:

The Delhi edition of Indian express did not put Hyderabad University on the front page.

Instead, it contained two stories on page 9, with the emphasis on visiting Kanhaiya Kumar.

The time of India

The Delhi edition of the best-selling English daily newspaper gave Hyderabad University a two-column space at the bottom of the page, with the headline â€œHyd univ locked: water, power cutâ€. The day’s four-column lead was India’s victory over Bangladesh in the T20 World Cup.

The newspaper that made the headlines during the JNU line mentioned Hyderabad University in an excerpt on page 1. The story, about the scarcity of food and water on campus, came to the fore. page 3.

The Delhi edition of Hindustan times did a two column article on its front page that focused on Kanhaiya Kumar’s press speech.

Chronicle of the Deccan

The Hyderabad based Chronicle of the Deccan has published three articles on Hyderabad University, including one on Kumar and the others on student unrest.

Hindi newspapers followed the same range of information as English newspapers. Navbharat Hours, one of the daily newspapers published by BCCL, the parent company of The time of India, published a front page article about how Kumar was denied permission to speak to students on campus.

In its Delhi edition, Punjab Kesri had a story about Kumar’s visit.