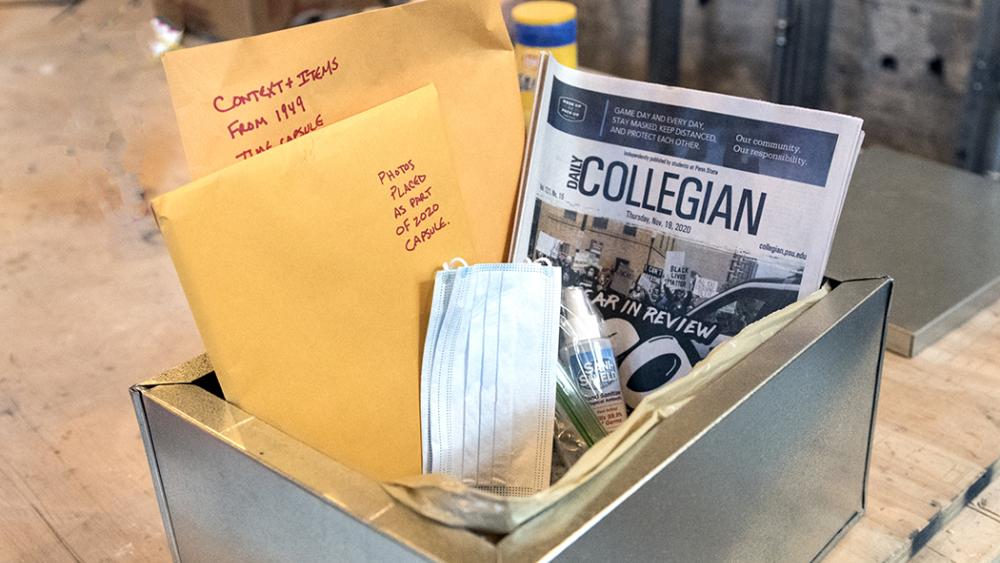 UNIVERSITY PARK, Pa .– A time capsule placed this week in the Bellisario Media Center largely focuses on one aspect of the Penn State community: its people.

The sealed metal box, slightly larger than a typical automobile battery, was filled with various documents and publications, including recent copies of the Daily Collegian, a Penn State Alumni Association’s Penn Stater magazine, and the Donald’s annual reports. P. Bellisario College of Communications. The capsule also includes a spring start-up program and samples of Penn State-branded face masks and hand sanitizer that were distributed to all students, faculty, and staff during the fall semester.

Letter from Bellisario Dean Marie Hardin helps frame the contents of the time capsule, which also includes a letter and student ID from Keely Reese, a freshman from Scranton, Pa., Reflecting on her first semester at the ‘university. Bellisario College’s most recent annual report lists Bellisario College faculty and staff, and a separate list of each person who helped build the media center has been compiled and included as well.

In addition, general admissions information, Bellisario College branded material, a 3D copy of a smartphone, motto and a variety of photos from last year at Penn State have been placed in the box which is intended for be open in 50 years – December 1, 2070. 3D printing of the phone has been included to prevent degradation of the battery of any device that could damage the contents of the box over time.

The time capsule was placed on the ground floor of the Media Center, which is under construction in what was once the oldest part of the Willard Building, originally known as Willard Hall. Construction of the media center is expected to be completed in early January, with faculty offices and student spaces in the state-of-the-art building to open later in the spring semester.

Construction workers found a time capsule from 1949 in the building earlier this year. Some elements of this capsule were again included in the most recent time capsule. Others will be kept for display at Bellisario College and Penn State.