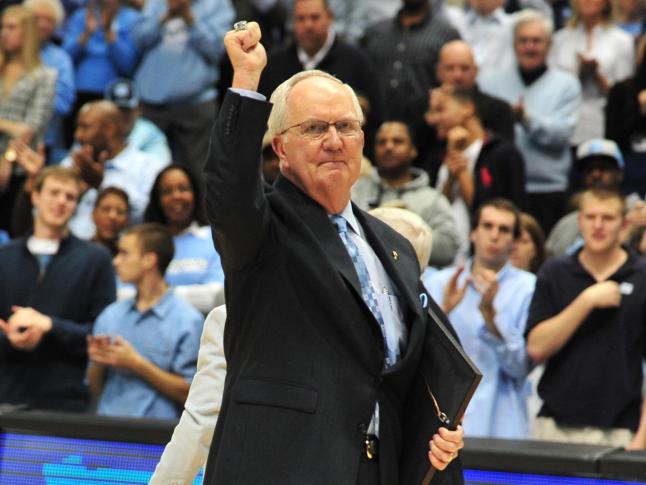 The Durham family, led by Woody’s wife, Jean, and sons, Wes and Taylor, will be recognized at halftime of Wednesday’s (February 16) men’s basketball game against Pittsburgh.

“This recognition for Woody was so emotional for me,” says Jean Durham. “This is totally unexpected, but I’m so grateful. I greatly appreciate the family who made the gift to honor Woody’s memory. Knowing how loyal he was to ‘his’ university, makes this honor even more special I hope when fans walk past the media center and see his name, it will trigger a thought of Woody and a smile.”

“We are grateful to the University and the Athletic Department for this incredible honor,” Wes and Taylor said in a joint statement. “The generosity he showed in naming this building after our father forever ensures his incredible association with Carolina. He never took for granted the opportunity to represent his alma mater, but also coaches and players who were the focus of his broadcasts. Nearly 11 years after his career ended, Carolina and ACC fans continually remind our family how much his work meant to them.”

“Woody loved his alma mater and the Tar Heels, and his work helped create generations of Tar Heel fans while setting a standard of excellence for every show, story and climax,” said the athletic director of Carolina, Bubba Cunningham. “We tell the stories of our 800 student-athletes and 28 teams across multiple media platforms at our Media and Communications Center, and it’s fitting that the building is now named in Woody’s honor. As Woody loved to say it, ‘Go where you go and do what you do.'”

Woody Durham died on March 7, 2018 from complications of primary progressive aphasia. He was the play-by-play voice of Carolina football and men’s basketball from 1971 to 2011. The Mebane, NC native grew up in Albemarle, NC and graduated from the Carolina in 1963. He called 23 Tar Heel bowl games, 13 Final Fours, and six NCAA championship games, including NCAA title-winning seasons in 1982, 1993, 2005, and 2009.

Durham received a Distinguished Service Medal from the UNC General Alumni Association for outstanding service to the University and the alumni association; the William R. Davie Award, given by the UNC Board of Trustees to recognize extraordinary service to the university; the Skeeter Francis Award for Special Service to the Atlantic Coast Conference; the Russell Blunt Legends Award from the North Carolina High School Athletic Association for being a true legend in track and field; the Lindsey Nelson Outstanding Sportscaster Award from the All-American Football Foundation; the Outstanding Service Award from the Lineberger Comprehensive Cancer Center Board of Visitors; a priceless gem from UNC Athletics; and a Distinguished Service Award from the NCHSAA.

“Tar Heel fans of all ages adored Woody and fondly remember his calls as sounds of their youth, their time as college students in Carolina, and many years to come,” said John Montgomery , executive director of the Rams Club. “We are grateful to one of these admiring fans for providing an extremely generous gift that allowed us to honor Woody in a very special way. He painted a picture on the radio for fans to remember 40 years of indelible moments and now the Woody Durham Media and Communications Center will continue to bring these plays and players to life for future generations of Tar Heel fans.”