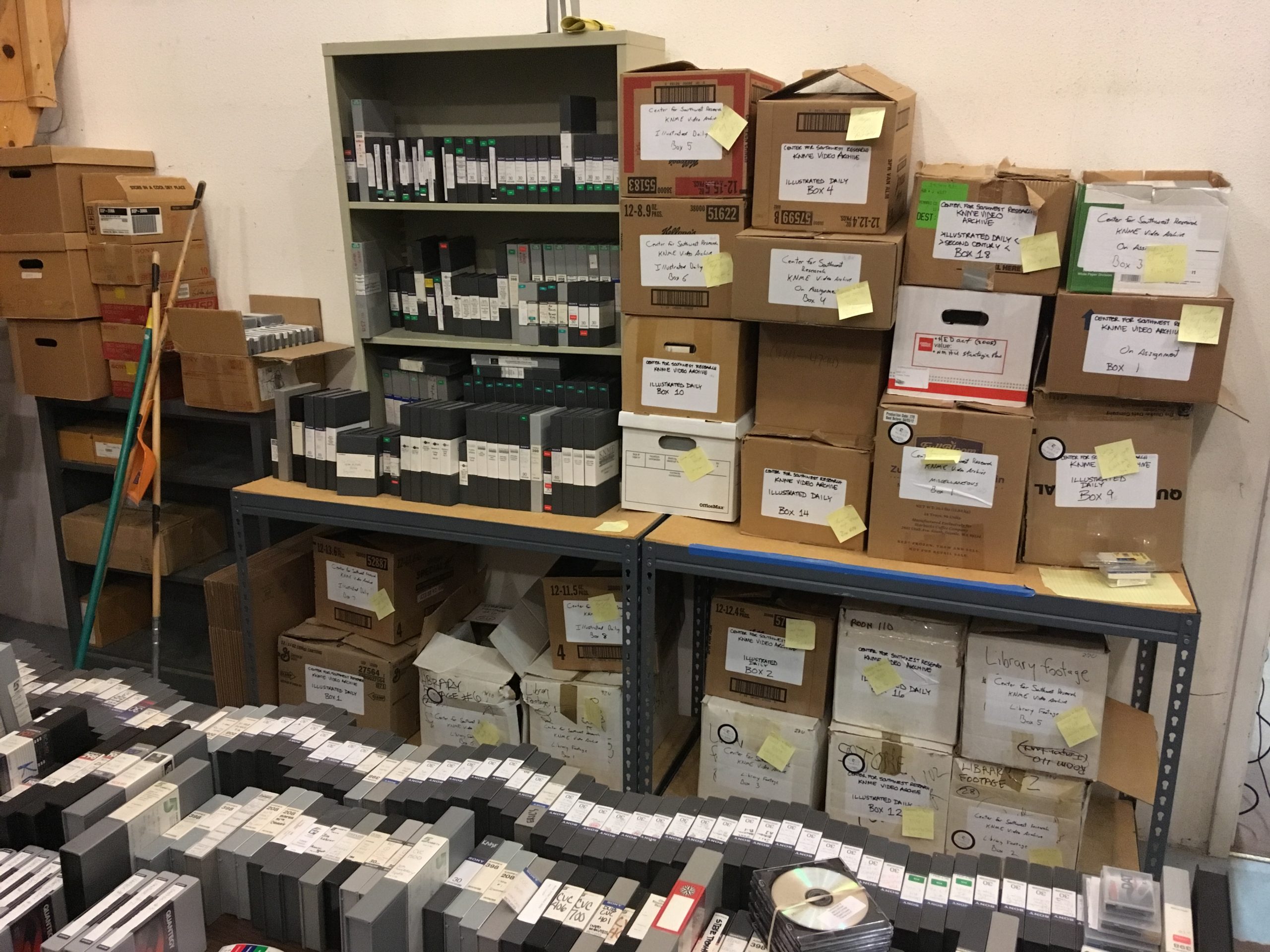 Why an organization is rushing to digitize decades of broadcast media

ALBUQUERQUE — When veteran television producer Michael Kamins started out at the New Mexico Public Broadcasting Service (NMPBS) in 1986, the station’s programming was brought to you by thousands of two-inch analog tapes and video playback juggernauts.

“Those huge dinosaur video cassette players were still in business,” Kamins, executive producer at NMPBS, said in an interview with Hyperallergic.

Eventually, the station transitioned to new technologies, leaving archival media in limbo. Although the materials were kept in a temperature controlled environment, there was no real understanding of how to take care of the archives. KUNM-FM 89.9, a National Public Radio affiliate based at the University of New Mexico in Albuquerque, kept some of its old audio tapes in the men’s restroom.

Over the years, public broadcasting personnel have come to realize that fragile material is at risk.

“It’s a videotape,” Kamins said. “It’s this little piece of plastic with a very thin layer of oxide and all of these molecules have been rearranged into an incredibly valuable story.”

Today, NMPBS staff and volunteers are at the forefront of digitizing decades of irreplaceable broadcast media produced in New Mexico through the New Mexico Public Media Digitization Project. The effort will preserve thousands of analog and digital media from the 1960s to the present day and includes half-hour episodes, hour-long programs and rolls of raw footage from five public television and radio stations in across the state. The project, which will digitize more than 8,000 video and audio tapes, is expected to be completed later this year.

Along with preserving a crucial and irreplaceable part of New Mexico’s history, the archives, which will be available in the public domain, illustrate the state’s unique social, political, cultural and artistic DNA while highlighting highlight underlying voices, stories and perspectives.

The New Mexico Public Media Digitization Project began after the NMPBS received a grant from the Council on Library and Information Resources. At this time, the NMPBS was fortunate to still have a solid, albeit disorganized, collection of treasures.

“There were times when people approached me in the train station and said, ‘If you don’t do something with it, take it out or we’ll throw it away,'” said Kamins, who is the project manager. “I told them, ‘No, we’re not. “”

Not all avoided the dumpster. In a truly heartbreaking anecdote, Kamins recounts the moment a huge volume of vintage NMPBS material was pulverized.

“They took all of the thousands of video tapes and ran them through a bandsaw to remove the aluminum flanges to recycle the aluminum and then threw the whole video tape away,” which wiped out a lot of the programs of the NMPBS before 1981, Kamins explains. “All of that history has been destroyed in this effort to recycle aluminum.

“That always stuck in my mind and with other people here,” he said.

The New Mexico Public Media Digitization Project is being done in conjunction with the American Archive of Public Broadcasting (AAPB), which will allow the public to view archival footage on the AAPB’s website for free from October 2022. (Some New Mexico content is already available.) In 2013, the Library of Congress and GBH Archives, which are also partnering with NMPBS on the project, became permanent custodians of AAPB, an archive created by the Corporation for Public Broadcasting – the collection now consists of over 135,000 digitized programs.

In 2019, the AAPB found that the archives lacked material from New Mexico. The following year, the NMPBS received the grant from the Council on Library and Information Resources, and the project started in January 2021.

A small team of staff, interns and volunteers digitizes the back catalog of video and audio tapes, such as the news program Focus on New Mexicoarts and culture fair ¡COLOURS!, and Espejos de Aztlan, which highlights the resistance and visibility of Chicana/o and Latina/o. The project’s five broadcast stations include Albuquerque’s NMPBS/KNME-TV, KUNM (FM), and KANW (FM); KRWG (PBS) at New Mexico State University at Las Cruces; and KENW-TV (PBS) at Eastern New Mexico University in Portales.

Upon completion, a network of more than 25 local, regional, and national partners—including the New Mexico State Library and the University of New Mexico Southwestern Research Center—plans to present a New Mexico Public Media Digitization Project portal on their respective websites. . The high resolution masters will live forever at the Library of Congress.

“The one that really stood out to me was the LGBTQ youth in New Mexico who got to speak out and talk about some of the discrimination that’s happening in the state,” Saiz said. “In another episode, people of color in the state spoke about how resources were not available to get medical care or feel uncomfortable in medical facilities.” Saiz added that other archive programs shine a light on the state’s female artists as well as the HIV/AIDS crisis in New Mexico.

In concert with the archival effort, Saiz and Rachel Snow co-curate the digital exhibition Witness New Mexico: The New Mexico Public Media Digitization Project. The exhibit, set to debut this summer in the exhibits section of the AAPB website, “provides a critical look at often obscured perspectives, histories, and peoples” through audiovisual media produced at the New -Mexico. The exhibit’s sub-themes “Reclaiming Histories”, “Revealing Forgotten Faces” and “Navigating Racism” will look at “the unfair treatment of people due to differences in ethnicity, race, class, gender, orientation, citizenship status, tribal affiliations, and intellectual and physical (dis)abilities,” Saiz said.

For Kamins, the project and the digital exhibit allow some of New Mexico’s most cherished people to continue contributing to the rich and unique fabric of the state.

“Over the years, I’ve had the good fortune to sit down with [Qatsi trilogy director] Godfrey Reggio and ask him to talk about our mistaken belief in technology. Or spend days with [artist] Rina Swentzell walking through Santa Clara Pueblo and talking to her about the wind and its importance. Or [New Mexico author] Sabine Ulibarrí giving fabulous poetry readings about race and how there really is no race because we all have the same blood color which is red,” Kamins said.

“You can’t go back to certain people and say, ‘Hey, what do you think now?’ Through this project, we’re reminding people that these great voices have been a part of our lives and can still be, and that’s incredibly valuable. It makes me feel like there’s something that Sabine Ulibarrí or the people who are no longer with us still contribute to who we are and what we can be.